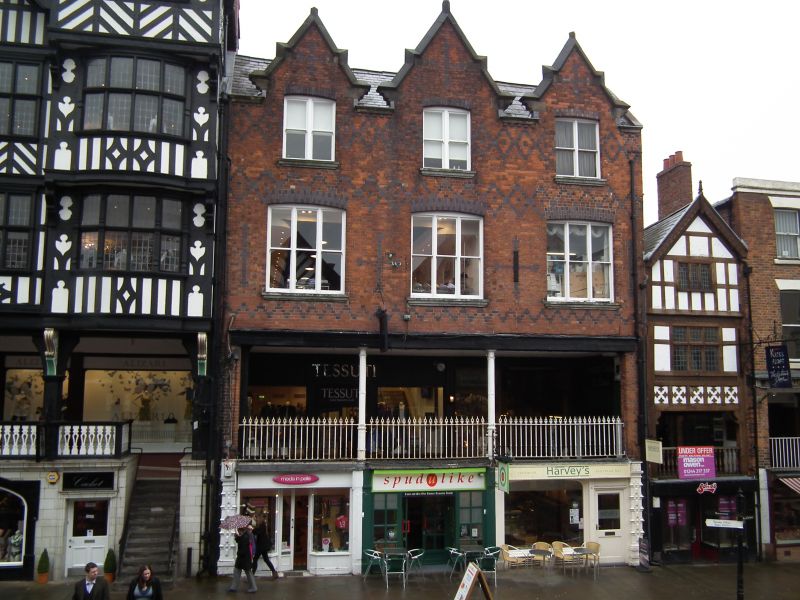 Part of Roman bath-house, then undercroft of a town house, now
a cafe with partly disused cellar beneath. C2, late C13-early
C14, altered 1864 and C20. Squared sandstone rubble and
painted brickwork.
EXTERIOR: the cafe has a street-level floor inserted 1864;
with the cellar beneath it comprises a tall medieval
undercroft, perhaps a seld or one-product market, as
documented elsewhere in Bridge Street. The west cellar wall
contains Roman bath-house masonry; the north and east cellar
and cafe walls have C12-C13 squared rubble sandstone masonry;
an opening through the north wall, towards the east end, leads
down 8 steps, now concrete, to the undercroft formerly at rear
of No.37 Street (qv), with floor and lower walls of bedrock.
Towards the north a rock-cut sump, probably medieval, fed with
water, has a timber rail on column-on-vase balusters, probably
1864; some oak beams and joists. A rebated medieval doorway,
east, leads to remains of a Roman hypocaust, perhaps restored
when found during redevelopment in 1864. There are 27
surviving square, waisted columns in a rectangular chamber
formerly containing 4 rows of 8 columns. A large 4-course
stone corbel and a smaller corbel to each side in east wall of
cafe.