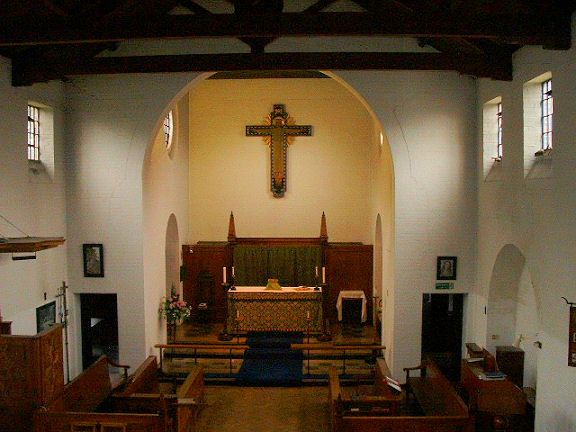 Church. 1932-3 by Isaac Taylor and W Cecil Young. Brown Blockley brick, Westmorland slate roofs. Squat (liturgical) west tower with set backs and hipped roof, with single-storey north chapel (former children's corner) and south porch; "basilica" plan has eight-bay nave with clerestory windows; short sanctuary; one-storey north vestry and south sacristy linked by a corridor with east door. Elegant use of brickwork and stepped massing. Architectural and decorative detailing includes: upright stretcher and header courses of brickwork for chamfered plinth, door heads, window heads and sills. The west end has panelled doors flanked by shallow pilasters with tapering moulded finials; circular windows above between shallow clasping buttresses; stepped belfry stage with squat louvred openings. The hipped roof is surmounted by a plain cross. Square four-by-four pane windows to nave clerestory and vestry, some with central six panes pivotted, in metal frames, and with shallow buttresses between. Smaller windows to vestries in same manner. Circular windows to chancel.
Interior is long and narrow, with white walls and open timber roof to nave, having king posts with splayed braces. Round arch to sanctuary, which has flat painted and gilded ceiling. The nave has always had rush- seated chairs, but at the cast end there are handsome choir stalls and pulpit designed by the architects, of timber and combining solid arts and crafts workmanship with C17 elements, reflecting the C17 style treatment of the west door. Sanctuary with Ancaster stone pavement and steps. Panelling with similar finials at cast end, above which the large painted crucifix is part of the original composition. Children's corner remodelled as Lady Chapel in 1952, with stained glass window. West end of nave now truncated by one bay, with full-height wall incorporating original gallery front, with late C20 doors below. Behind this a low ceiling has been inserted. 1934 font with Ancaster stone tulip shaped bowl on chamfered based with carved wave motif below the rim and a wooden lid.
Taylor and Young were the most significant church practice to work in the Manchester area in the inter-war years and their churches are powerful compositions that make the best of limited budgets. St Gabriel's is a carefully considered amalgam of C17 brick and timber motifs within a massing derived from contemporary Dutch and North German sources that make for a fine, distinctive composition. It is one of the firm's finest churches.
Sources Incorporated Church Building Society, New Churches Illustrated, 1936