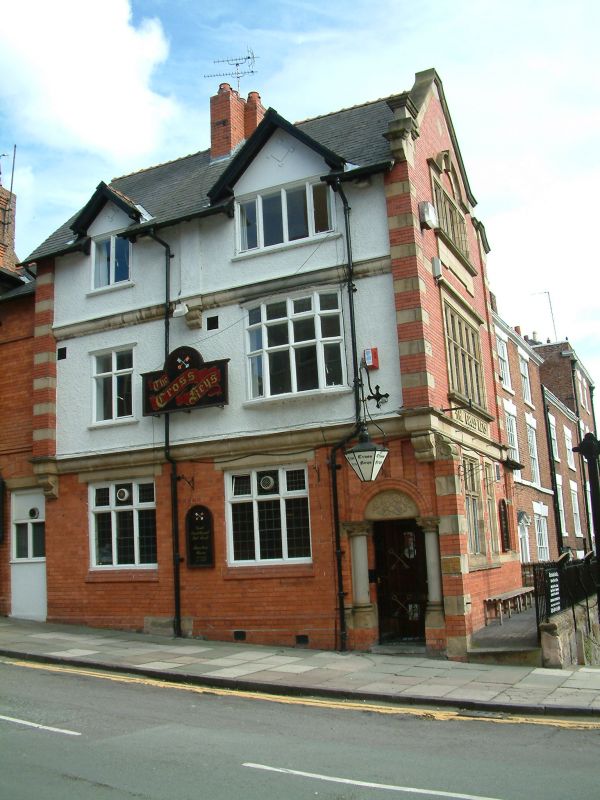 Public house. Rebuilt 1894 by WM Boden and raised forecourt,
probably earlier. Stone-dressed red Ruabon brick, pebbledash,
grey slates and red sandstone squared snecked rubble. Free
style.
EXTERIOR: beer cellar and 3 storeys. The front to Duke Street
has round-arched recessed porch at west corner with Bridge
Place, having columns with foliar caps in C13 manner, crossed
keys incised in spandrel and stone-banded corner buttress;
porch floor of tiles and mosaic; part-glazed oak door,
panelled in C17 manner; two 3-light mullioned and transomed
windows, leaded above transoms; a blocked doorway,
part-glazed; a 2-light casement and a 4-panel door with
overlight in east wing; stone lintels and segmental brick
arches. The second storey of the main block has a moulded
stone jetty with carved end-consoles; pebbledash; a shallow
canted oriel of 4 lights with 2 transoms and a cross-casement
with frame proud of wall-face. The east wing has a
cross-window. The third storey has a moulded stone jetty
between stone-banded projections, a 4-light casement, a
pilaster and a 2-light casement, each under a dormer gable
with moulded bargeboard; the east wing has a pair of
cross-casements under a timber-framed dormer gable. A red
brick ridge chimney.
The west face to Bridge Place has floor-bands, banded quoins,
window surrounds, mullions and transoms of yellow stone. The
first storey has a 1-light transomed window to each side of a
leaded cross-window in the gable-end of the main block, a
half-bay window against the south return of the gable-end and
a pair of cross-casements with brick mullions and stone
transoms in the south wing. The second storey has a slightly
jettied floorband and a 5-light leaded casement in the
gable-end and a timber cross-casement in the south wing. The
third storey has a flush floor-band and a 4-light mullioned
casement in the gable and a hipped 2-light dormer in the roof
of the south wing. A ridge chimney and a south gable chimney.
The forecourt to Bridge Place has west and south walls of
squared snecked red sandstone rubble, double boarded doors to
the beer cellar in an opening with segmental arch, looking

older than the public house. One step up to blue brick
pavement of the forecourt.
INTERIOR: altered, but retaining some of its original
features.
The building is prominently sited on a street corner and makes
a positive contribution in townscape terms.
(Improvement Committee Minutes: Chester City Council:
27/2/1894: 1894-).