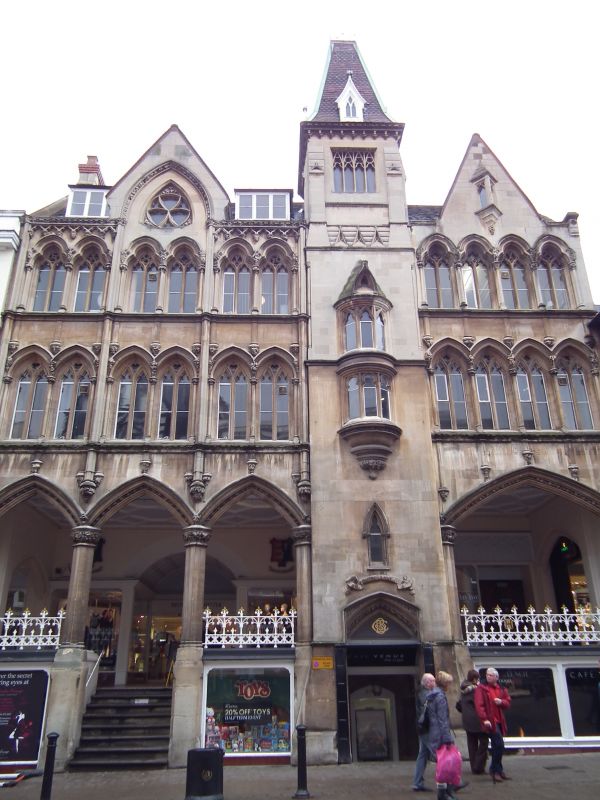 In part undercroft of former town house c1300, the frontage
and Row storey and above rebuilt as department store 1858 by
TM Penson for William and Charles Brown of the Browns of
Chester family of drapers. Red and yellow sandstone; banded
brown tile roofs.
EXTERIOR: 4 storeys including undercroft and Row plus attics
in High Gothic manner. A square stair turret with 3 arcaded
bays east and one wider bay west. The undercroft bays are
divided by stop-chamfered piers; shop windows have
stop-chamfered posts and lintels and rounded upper corners to
panes; from left to right a window, a flight of 8 sandstone
steps to Row, a window and a side-buttressed entry under a
carved archway in the tower to the undercroft; 2 windows to
the medieval undercroft.
The Row front has ornate Gothic cast-iron rails between
trefoil pier-responds and quatrefoil columns carrying moulded
and carved arches; boarded sloped stallboards 1.81m from front
to back; terrazzo Row walk; shop windows with marble
stallrisers, colonnette mullions and panes with shaped upper
corners; a moulded arched showcase beside the tower; an arched
oak framed and boarded door on wrought-iron hinges to spiral
stair in the tower; 3 moulded arches across Row; Row ceiling
of octagonal and lozenge panels with cornice decorated with
Tudor roses; a blank scroll at front of tower; recessed panels
inscribed W.B. (William Brown) on east face of tower and
C.B.(Charles Brown) on west face; scroll on rear face
inscribed AD 1858: CRYPT CHAMBERS; Chester City arms and a
scroll to each side of shop entrance. Each of the third and
fourth storeys has 3 pairs of 2-light windows with colonnettes
between, east of tower, a semicircular 2-storey oriel on the
tower and, west of tower, four 2-light windows detailed like
those in the east wing. Carved heads as corbels support
trefoils beneath an ornate cornice. A gable over the central
bay of the east wing has a traceried window in a circular
triangle; the tower has a rectangular 4-light traceried window

between shallow buttresses; the front gable of the west wing
has a small triangular oriel. The tower has a truncated spire
with a gabled dormer on each face containing a 2-light
traceried window; ornate cast-iron rail to the look-out
platform.
INTERIOR: 5 steps down to undercroft lobby; sandstone flags to
lobby; glazed framed and boarded door, east, and with leaded
glazing, west, to the medieval undercroft, which has 2 steps
down to the landing before it, then 6 down to the floor. The
undercroft front, heavily restored but without alteration in
1858; arched, central doorway has lancet to each side,
indicating that it had steps straight down from the street;
openings have concave chamfers, probably c1300 AD. The
undercroft has 4 rib-vaulted bays. The ribs are chamfered and
the masonry of the vault is of high quality. A rear passage
perhaps contemporary with the undercroft, beside it to the
east. The undercroft extends backward, but with no visible
evidence of pre-C20 work; there is a C19 opening in the east
wall of the undercroft and an opening possibly of medieval
origin to the rear. 2 barrel-vaulted bays of C18 or C19 form
east of the medieval undercroft. At Row level surfaces are
largely covered, but 2 ceiling panels with circle-in-square
mouldings having flower-and-foliage motifs; open-well stair
has 2 blank arches of 1858 in north wall of well.
The medieval undercroft is an excellent example, and the
frontage and upper storeys of special interest as an early
example of the development of a department store.
(Chester Rows Research Project: Harris R: Eastgate Street
South: 1989-1990; Journal of the Chester Archaeological
Society: Old Series: Chester: 1858-: 261 (5/5/1858)).