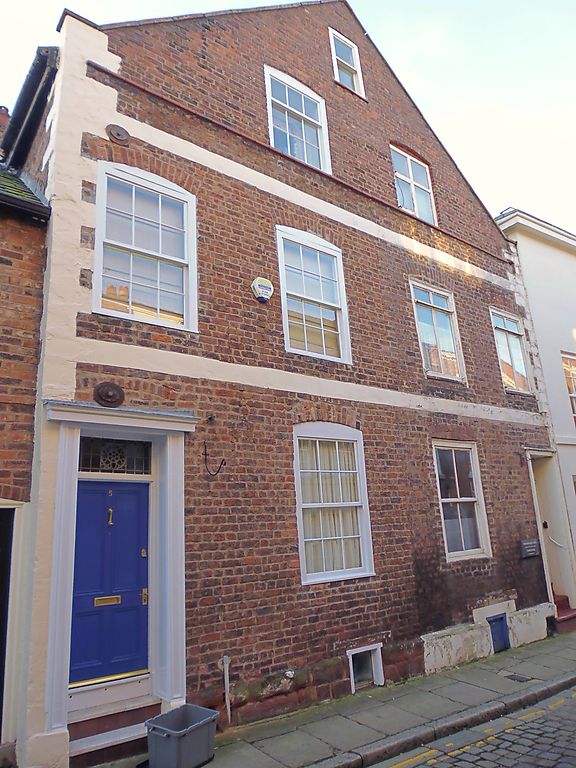 Town house. Probably later C17, converted to 2 houses c1720
and with some later alterations. Stone-dressed brown brick in
irregular bond; grey slate roof has coped gable to street.
EXTERIOR: cellar, 2 full storeys, attic storey and loft.
Coursed sandstone plinth with unbroken joints beneath window
of No.5 and rendered to No.7 has cellar vents; inserted
doorway with cambered brick head at each end of front: No.5
has refaced steps to door with a glazed cross-panel over 2
tall panels, with a leaded overlight in a panelled doorcase
with a small hood; No.7 has 3 stone steps to a door with 2
flush lower panels, 2 glazed middle panels and 2 fielded upper
panels, 3-pane overlight and plain doorcase. Flush stone
quoins. No.5 has flush sashes, No.7 replaced windows in
little-altered openings: one 12-pane sash under cambered brick
head probably of original doorway and one 4-pane sash under
inserted cambered head to the first storey; flush second
storey floorband; two 12-pane sashes and 2 metal casements to
the second storey; flush attic floorband; one 9-pane sash and
one wood 4-pane cross-casement to attic; a small 2-pane sash
to loft; plain stone coping to full-width gable.
The back has a narrow 2-storey gabled rear wing at each end,
probably added. One restored nearly flush sash of 12 panes and
one of 8 panes to the first storey; the second and attic
storey each has a restored 12-pane sash to No.5 and a replaced
4-pane sash to No.7. The loft has a replaced 1-pane window. A
central ridge chimney; a small-span roof with ridge parallel
with the street rises from each side of the main roof,
terminating in a gable chimney.
INTERIORS: No.5 has cellar with sandstone winder steps, outer
walls of squared rubble sandstone and party wall of brick, all
plastered; oak beam front-to-back supported on an inserted
circular brick pillar. The hall has a 4-board door to rear on
gudgeons; the front room has a corner fireplace with a domed
semicircular fire opening and a chamfered cross-beam; the back
room has a probably C19 kitchen grate in a brick opening and a
roughly-chamfered oak cross-beam. The stair to the second
storey is replaced; the front room has a cast-iron grate in a
corner fireplace, a chamfered oak cross-beam and exposed
joists; the back room has an oak cross-beam and exposed
joists. The closed-string stair to the attic has stout square
newels and 2 barleysugar balusters per step; the front room
has a chamfered lower purlin and a collar-beam of oak, a
corner chimney-breast and an inserted stair to the front attic
room which has an oak post, 2 unwrought purlins and rafters of
oak.
No.7 has cellar with sandstone winder steps, coursed rubble
sandstone outer walls, party wall to No.5 and arched wine bins
of brick, bedrock floor and chamfered oak beam running
backward. The first storey front room has oak panelling
largely covered, a covered corner fireplace, a chamfered oak
cross-beam and a cornice; the back room has a chamfered oak
cross-beam. The newel stair with winders at each end of a
short straight flight in each storey has turned balusters. The
second storey and attic storey rooms have chamfered oak
cross-beams; the rear loft (the front loft belonging to No.5)
has heavy unwrought purlins, one scarfed, and a diagonally set
ridge-tree of oak.