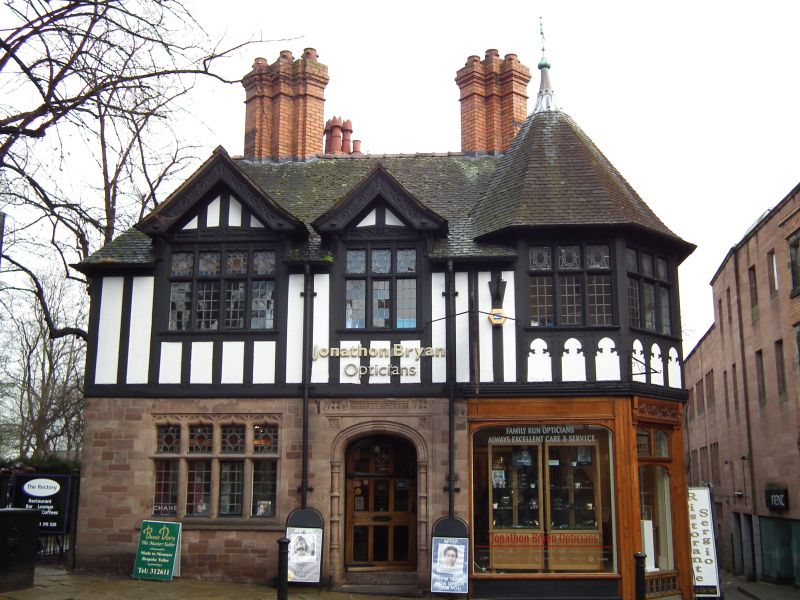 Offices, now opticians. 1898. By John Douglas as architect and
probably developer. Squared snecked red sandstone rubble,
timber frame with plaster panels and red Ruabon brick; hipped
Westmorland green slate roof; the building is almost detached.
EXTERIOR: 2 storeys, double-fronted, asymmetric. The front has
a shaped 9-panel door now glazed in a basket archway with
colonnettes, 18;98 in spandrels and SAINT OSWALD CHAMBERS
above; a 4-light leaded ovolo-mullioned casement north and a
shop window south with leaded glazing in stallriser. The
timber-framed second storey has a 4-light mullioned and
transomed leaded casement, north, the upper lights with
patterned leading, under a carved lintel; a similar window of
3 lights above the doorway; a casement of 3;3;3 lights around
the south-west corner, above small-framing with cusped-arch
heads; dormer gables with richly carved bargeboards over the
north and central casements; a short octagonal spire over the
south-west window has a weathervane on the lead finial. The
north side has a 3-light mullioned and leaded casement and
three 4-light mullioned and transomed casements to the first
storey and a similar series, with leading removed, to the
second storey. The south side has a 2-light casement plus a
1-light casement at the canted south-east corner; the second
storey has a casement with leading removed. The rear wing, of
brick to the lower storey and framed above, has 2 casements to
each storey with some leaded glazing. 3 shaped brick chimneys.
INTERIOR: has some alterations and covered surfaces, but
retains features including doors.
(Hubbard E: The Work of John Douglas: London: 1991-: 192).