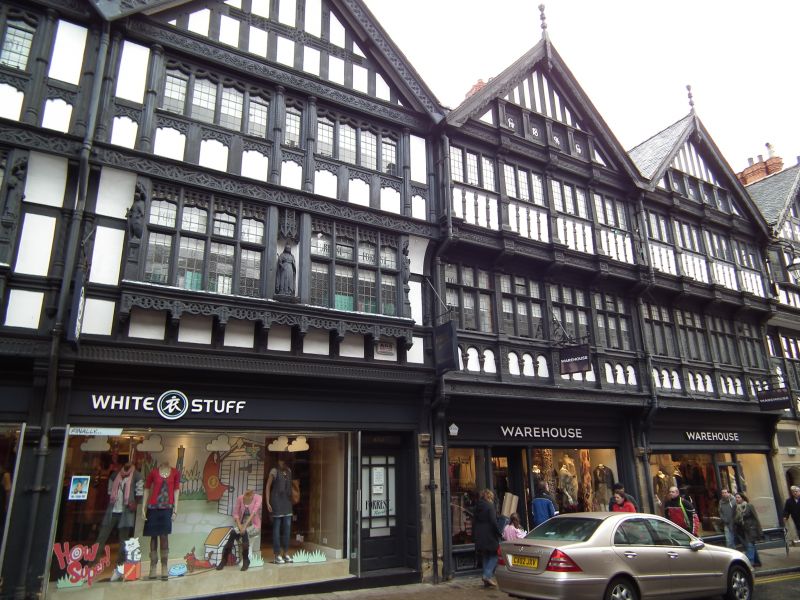 Includes: No.35 Street EASTGATE STREET AND ROW.
Terrace of bank, 7 shops and offices. 1895-9. By John Douglas
as architect and developer. Yellow sandstone and
plaster-panelled timber framing; stone was intended
throughout, but changed to timber frame at request of the
first Duke of Westminster; green Westmorland slate roof.
EXTERIOR: 3 storeys plus part attic; one bay to Eastgate
Street and 9 bays to St Werburgh Street. The bank comprising
No.35 Eastgate Street and Nos 2 & 4 St Werburgh Street has
stone first storey on polished granite plinth; double 9-panel
doors in moulded basket archway to street corner, with
corbelled head of 3 cusped ogee arches dated 1897; a
basket-arched 4-light mullioned and transomed window with
carved spandrels and shields to Eastgate Street; 3 similar
windows followed by 2 of 3 lights and a 3-panel oak secondary
door to St Werburgh Street; a shield bearing a grasshopper and
an eagle with olive leaf. The 7 shopfronts to St Werburgh
Street have sandstone piers; No.8 has a probably original
carved stall-riser.
The second storey is small-framed, all windows having
mullions, transoms and leaded glazing: a 5-light oriel to
Eastgate Street; a 4-light corner oriel on a stone corbel;
casements varying between each bay, including some oriels, to
St Werburgh Street; every main framing element is decorated;
10 saints in niches; Nos 6 & 8 St Werburgh Street are in
Jacobean Ionic style. The third storey is jettied, with
mullioned windows varied between bays; a broad shallow oriel
to No.4 St Werburgh Street and a large jettied tourelle oriel
at the corner of No.18. A gable to Eastgate Street; 4 dormer
gables, 6 full gables and a dormer gable to St Werburgh
Street; an octagonal spire with weather-vane on a lead finial
over the tourelle.

The roof attic set back over Nos 2 & 4 St Werburgh Street has
leaded casements under a continuous dormer roof. Ridge
chimneys of varied shape, some spirally moulded.
One of several building groups where Douglas was both
architect and developer, he stated that he undertook this
development to ensure that its design was suited to the
prominent site adjacent to the Cathedral.
INTERIORS, which could not be inspected systematically, retain
some original features.
(The Buildings of England: Pevsner N & Hubbard E: Cheshire:
Harmondsworth: 1971-: 162).