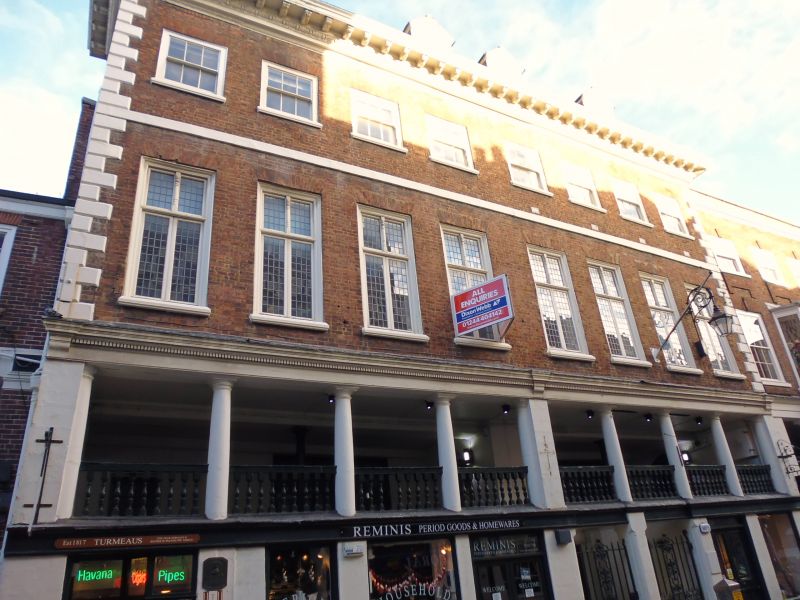 2 undercrofts and town houses. C13 undercroft largely rebuilt
from Row level upward 1700 for George Booth as the Chester
mansion of the Booths of Dunham Massey, converted to Assembly
Rooms c1740 and now Sothebys Auction galleries. Medieval
stonework and timber; C18 brickwork, later extended; grey
slate roofs.
EXTERIOR: the altered front of painted stone to the
undercrofts has double doors each of one panel in a recessed
porch east of centre to No.30 Street behind a pier with a
wrought-iron gate to each side; the east undercroft has a pair
of double doors to No.28 Street each with 2 panels below a
larger glazed panel, with a 1-pane window further east; the
west undercroft has a pair of modern glazed double doors to
No.32 Street, with two 1-pane windows and a small shopfront to
No.34 Street with a recessed door of 2 panels below a larger
glazed panel.
The Row front has end and central piers with Tuscan responds;
3 Tuscan columns carry the bressumer over each bay, with one
added column carrying a parallel beam to each bay, behind. The
east and central piers and the pointed arches which they carry
over the Row walk, now rendered, are C13, formerly at each end
of the gallery of the eastern medieval town house; the west
pier of the former western house carries a rendered beam over
the Row walk, probably in place of a former arch. No.28 Row
and No.30 Row have rendered frontages to the Row walk; each
has a tripartite sash, formerly of 12;12;12 panes but with
lower glazing bars removed. No.28 has a door of 6 fielded
panels; No.30 has a replaced blocked 6-panel door.
The bressumer above the Row, on brackets from piers, has a
dentilled cornice. The third and fourth storeys of brown
Flemish bond brickwork have rusticated stone quoins, plain
floor-band and ornate medallion cornice returned at ends; the
facade projects from the street line and is slightly angled to
be seen from the Cross. The third storey has 8 leaded cross
windows with baluster mullions above the transoms; the fourth

storey has eight 6-pane sashes, just taller than square; the
windows all have painted moulded stone sills and gauged brick
flat arches. The roof with ridge parallel with the street, has
short hips in front of end gables with chimneys; there are 4
slate-cheeked gabled dormers with replaced 2-pane casements.
Later extensions conceal the rear elevation.
INTERIOR: the east undercroft is one and a half plot widths,
7.0 x 13.0m. A central stone arcade of 5 bays now truncated to
4 has 2-centred arches on octagonal piers. The coursed
sandstone side walls have corbels supporting closely-spaced
massive joists dendro-dated 1260-1280, halved over the arcade.
There is a blocked rebated 2-centre arched doorway and 2 stone
cupboards in the rear wall. The west undercroft is 8.0 x 10.7m
with a samson-post central arcade of timbers dendro-dated
c1260-1280, now filled with rubble brickwork. A rear extension
to the undercroft has 2 parallel pointed barrel-vaults built
of wedge-shaped stones. Throughout its height, the east party
wall of the eastern medieval house survives, visible from
No.26 Row (qv), with a coved cornice at the head of its east
face. Like many Row properties there is a thick rubble-filled
floor between undercrofts and Row level, possibly for fire
proofing between the medieval commercial and domestic
premises. A late C13 arched doorway of oak in the east house
marks the front of the medieval hall, set back further than
usual probably to allow for a service or stair bay between
shop and hall. The present stair hall which approximately
coincides with the former great hall has a C13 stone corbel,
shaped as a crouching man at the centre of its west wall,
probably a support for the former principal truss.
A slightly altered Jacobean open-well stair with shaped splat
balusters, inserted in the south-east corner of the hall leads
to the third and fourth storeys. Details of other rooms at Row
level and those on the fourth and attic storeys are concealed
by modern finishes and partitions.
At the front of the third storey is a splendid early C18
Assembly Room approx 16 x 10m occupying the full width of the
mansion. Nib walls projecting from the front and back suggest
that 2 principal rooms were thrown together in the 1740s when
the mansion became assembly rooms. The room is panelled in
oak, with one row of panels below the dado and a tall panel
surmounted by a short panel below the cornice; the fireplace
against the east wall has an overmantel of one panel; each
half of the room has a double door with 3 panels to each leaf
in its rear wall; double doors of similar design have been
inserted in the east wall to give access to No.26 Row.
(Chester Rows Research Project: Brown AN & Grenville JC &
Turner RC: Watergate Street: Chester: 1988-: 32; Bartholomew
City Guides: Harris B: Chester: Edinburgh: 1979-).