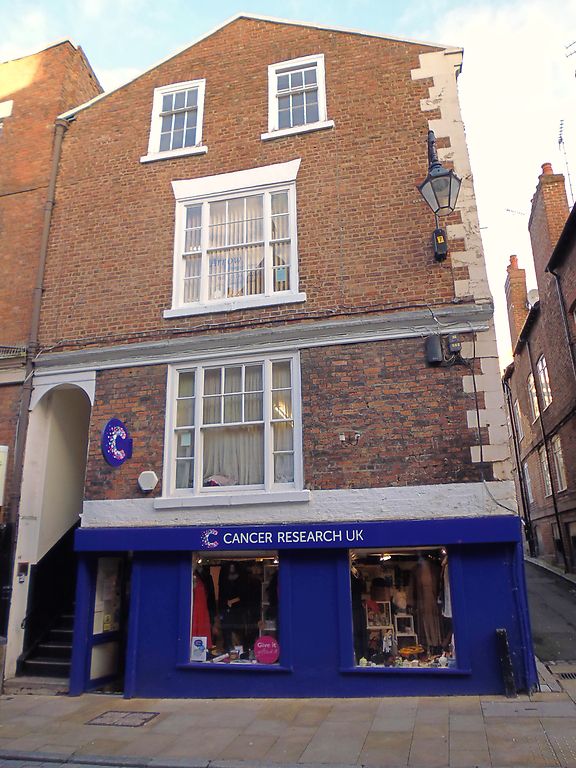 Undercroft and town house, now shop and offices at undercroft
and Row levels and 2 storeys above, vacant in October 1991.
The Row was enclosed and the building largely reconstructed
early C18. Brick with grey slate roof.
EXTERIOR: 4 storeys. The rendered front to the former
undercroft has 2 simple 1-pane shop windows east of a modern
glazed shop door. At the west a flight of 11 steps in a
recessed porch leads to a 6-panel door at former Row level,
which has a flush tripartite sash of 4;12;4 panes with bars
removed from the central lower sash. The third storey has a
similar sash with all glazing bars, and the fourth storey has
two 9-pane unequal sashes; the former Row bressumer level has
a moulded stringcourse; the corner to Crook Street, east, has
flush painted stone quoins; painted stone sills; gauged brick
arch to third storey sash; slightly cambered arches to fourth
storey windows; stone-coped gable to street. The east side to
Crook Street has a boarded opening to the former undercroft, a
4-pane sash and a 9-pane stair window to the Row storey, a
band of 3 brick courses at third storey floor, raised over the
stair window, a blocked opening and a small inserted window in
the third storey; a blocked brick arch right of the stair
window; 2 large lateral windows. The rear has a high-walled
yard, 2 flush 12-pane sashes to third storey, a stringcourse
on brick corbels carried also across Nos 48 & 50 Street (qv),
a 9-pane unequal sash and a 16-pane flush sash to the fourth
storey; the window openings have cambered heads, on blocking
courses to the third storey; a gable to the rear.
INTERIOR: the front room of the undercroft has a chamfered oak
beam and a plastered beam; the stair bay has some rough timber
framing in the west wall and a newel stair with 2
barleysugar-on-vase balusters per step and a heavy moulded
rail, all painted; a large damaged oak beam across the front
of the stairwell; the rear room has an open fireplace against
the east wall and 2 large, re-used oak beams spanning front to
back, with exposed joists; a 2-panel door from stair to Row
storey. At the former Row level the front room has a door of 4
fielded panels, a ceiling of 3 panels between moulded beams

spanning from front to back and a carved fire-surround of
wood, painted; the window embrasure to Crook Street has
panelled shutters. The east rear room has a wide
fireplace-opening in breast on east wall; the west rear room
has some altered small-panelling of oak. The stair, broader
than that below from the undercroft and in good condition,
rises to the third and fourth storeys. The front third storey
room has early C18 bolection moulded panelling with one row of
panels below the dado rail and a tall row above; the
overmantel has a large panel above a pair of small panels; 2
stop-chamfered plastered beams; a moulded cornice; the door is
replaced. The 2 rear rooms have embrasures with window
shutters. The fourth storey has no visible features of
interest.
(Chester Rows Research Project: Brown AN & Grenville JC &
Turner RC: Watergate Street: Chester: 1988-: 33).