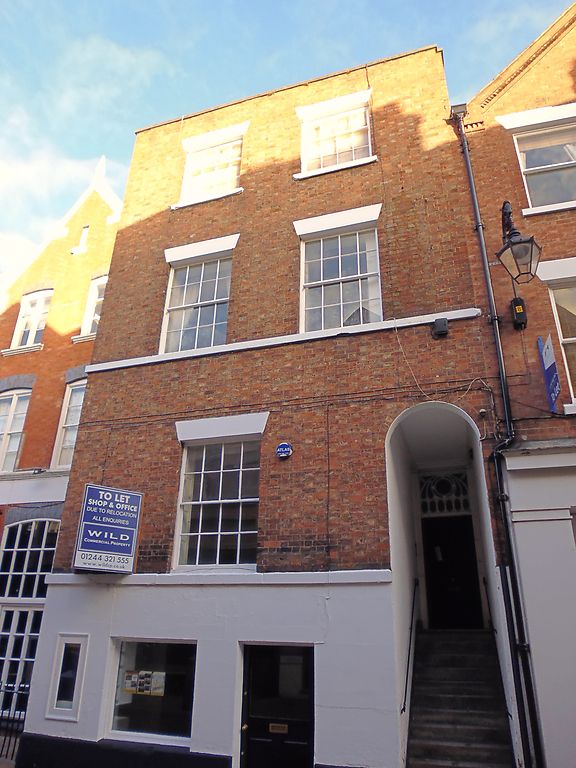 Undercroft and town house, now shop and 2 vacant flats in
October 1991. Origin probably c1300 but refronted and largely
rebuilt c1840 and rooms on the third and fourth storeys
relined late C20. Some sandstone; Flemish bond brown brick;
slate roof with brick parapet.
EXTERIOR: 4 storeys. The rendered front to the undercroft has
a plinth, a glazed door with a large pane above a pair of
smaller panels, a plain shop window, a small window and, next
to the east party wall, a tall round-arched porch containing
eleven steps to the storey at former Row level, with a door of
6 fielded panels beneath an ornate overlight with a roundel
and 6 oval panes flanked by four curved daggers. The sashes
are recessed, with one to the Row storey and 2 to the third
storey of 16 panes and 2 of 8 panes/4 panes to the fourth
storey. A sillband of painted stone to the third storey; the
other sashes have painted stone sills; all have wedge lintels.
All openings have been removed from the lowest storey of the
rear gable end; the middle storey has 2 recessed 16-pane
sashes with painted sills and gauged brick heads; the top
storey two 8/4 pane sashes with cambered heads.
INTERIOR: the undercroft east wall of coursed sandstone c1300
has damaged corbelled stone steps formerly to Row level, now
within a cupboard; c.f. Chorley Old Hall, Chorley C.P.,
Macclesfield Borough. 2 flat oak beams. Stair hall with basket
arches; stair-well with 2 rounded niches and domed lantern of
iron; dogleg open-string stair has brackets, reeded stick
balusters, winders and swept handrail with wreath at base.
(Chester Rows Research Project: Brown AN & Grenville JC &
Turner RC: Watergate Street: Chester: 1988-: 33).