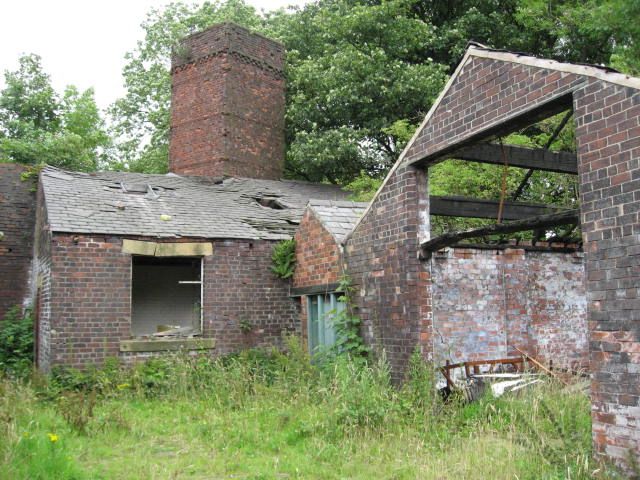 1. Clegg Hall House, with attached boundary wall on Branch Road.
2. The reservoir (lodge) to SE of Clegg Hall House with sluice and overflow channel which runs below the house drive and below Clegg Hall Road, emptying into the canal via an open channel on the steep banking outside the NE end of the canal-side mill range; the sluice for the head race of the water wheel is at the S end of the darn.
3. The remains of the mill buildings on the SE side of Clegg Hall Road which contain the water wheel pit, the engine house, attached mill ranges on NE and SW sides and including service tunnels beneath the cobbled roadway on the NW side, which lead to the canal-side mill.
4. The boiler house, fuel store, workshop with blacksmith's forge and chimney range separated from the S side of (3) by a stone flagged pathway and steps approx. 1m wide.
5. The canal-side warehouse and mill range, with waterwheel tailrace tunnel below, and added range at SW end.

CLEG HALL HOUSE. Late C18 with early C19 alterations and late C20 addition. Coursed squared gritstone laid to water-shot courses, stone slate roof.
2 storeys, 2 bays, entrance porch on W side, rear (N) outshut and servant's cottage, now part of the house. Quoins with edge-tooling.
S Front: the large bay window with mullions and transoms is late C19 and was brought here from a Jewish school in Manchester c1970. The upper floor facade has 2 tall casement windows with tie-stone surrounds; the walling has vertical. joints, evidence of an earlier row of windows with flat-faced mullions, possibly a weaving loft. A central mullion is grooved to give the appearance of separate stones. Tall banded end stacks and another to rear of ridge, centre. The entrance porch is probably an addition of the 18308 (likely date for present 1st floor windows) , and has a heavy stone surround with moulded base to jambs, lintel not visible, round-arched windows on returns, all obscured by vegetation.
INTERIOR: not inspected.
Attached boundary wall is approx. 2m high and 5Om long, coursed stone on road side, hand-made bricks to garden side, in 4:1 English bond, flat stone coping.

MILL LODGE. Stone lined, approx. 5 to lOm wide, 75m long.
Built along the contour, with a steep embankment on the S side and the bed raised at the centre, indicating the line of a former drive to Clegg Hall, or two phases of construction. Earthwork traces of the mill goit and sluice at the SW corner of the dam at the Wend, and a stepped overflow channel close to Clegg Hall House, acting as a 'top-up' for the Rochdale canal. The lodge is spring-fed.

MILL BUILDING {remains of), on SE side of Clegg Hall Road. The site possibly pre-dates the canal as it contains the water-wheel pit. Coursed squared gritstone laid to water-shot courses, brick rebuilding, Welsh slate roofs. This range was severely fire damaged c196S. Walls reduced in height.
Central taller block is the former engine house {left side) , the tall round-arched window survives at the rear, with blocked original doorway left, inserted doorway below, and wooden steps and platforms inside. The building has late C2O steel and concrete floors inserted since the fire.
Early features include: a blocked round archway in the stone side wall, which is built to water-shot courses, now obscured by a straight-flight wooden stair; charred beams; remains of cantilevered stone stairs to missing top floor; blocked round-arched window in exposed S gable.
Left wing: reduced to single storey, 6 bays, large windows in stone surrounds.
INTERIOR: the stone flagged floor covers the deep water wheel pit set against the S wall {adjoining the engine house).Pit not seen in detail, but stone lining visible through trap door and edge-tooled blocks with wheel grooves described {Mr Docker, pers.comm.); the wheel was probably approx. 12m in diameter, the pit is now dry. The tail-race tunnel extends below the cobbled road and under the canal-side range {qv) . Another, smaller tunnel carried pipes and later electricity under the road. This part of the mill housed drying machinery and dye vats mid C2O. To right of the taller central block a blank wall, single storey, with moulded stone gutter brackets and quoins. Rebuilt with wide M-roof, light brown brick on right return. Part of the dyeing complex mid C2O, when the mill made yellow dusters.

BOILER HOUSE AND CHIMNEY RANGE. Mid C19. Rubble and brick walling, mostly ruined. It was an L-shaped block, with the boiler house close to the engine house (beds still visible) ,
coal shute from the higher-level rear yard, base of the square brick chimney with decorative band of bricks on edge (upper part demolished c1976) .At a lower level, on the SW side, the flue to the chimney and the blacksmith's forge in the corner survives in part. Lean-to roof of this section rebuilt mid C20.

CANAL SIDE RANGE. Probably contemporary with the construction of the Rochdale canal (1801-1804) and altered mid C19. Coursed squared gritstone, slate hipped roof. 3 storeys to canal, 1 and 2 storeys against sloping roadway, 13x2 bays. Quoins. At the SW end the attached single-storey stone range with slate roof covers the sloping ramp which gave access to the lowest floor of the main building; there are 2 tall round archways on this facade which rise through the line of the lst floor. The canal side has loading doors bay 4, and 2 round arches at water level, (water wheel tail race and overflow from the engine house range) ; a stone walkway extends along the building just below the present water line. 9-pane windows with tie-stone jambs, iron rings set into top floor lintels probably for winches bringing machinery or parts into the building.
Facade to road: 2 doorways, wide on left and pedestrian on right, with chamfered jambs and voussoirs, basket arches. Above the pedestrian entrance there is a weathered stone
plaque, and a clock in carved stone laurel-wreath surround and moulded frame above the eaves line.
INTERIOR: basement level stone flagged floor, retaining wall below ground level with blocked service tunnel and upper part of the tail race tunnel with floor cavity. Timber cross beams with extra cast-iron columns and secondary metal sleeves to support the timbers built into the retaining wall. An original grooved stone ramp approx. 1m wide rises to a stone platform and loading bay to the canal (now a window) at the SW end of the building. A straight-flight timber stair is set against the revetment wall on each floor and is a mid-late C19 replacement.
The middle floor has blocked doorways in the NE gable end and, at the SW end, a square opening to a timber-lined rising and curving tunnel which linked to a mill block standing to the S of the engine house range, demolished. Small 2-wheeled wooden trolleys with hollowed tops "carried bolts of cloth from the higher level, possibly after the final finishing process was completed.
Top floor: a well-lit open room with windows on both long sides, 12 king-post roof trusses with splayed braces, pegged.
HISTORY: the deeds to Clegg Hall House survive from the late C18. In 1811 Joseph Fenton {flannel-maker at Crimble Mill, {qv) ) , applied to build a mill on the site. It therefore possibly began as a flannel mill, the wheel powering spinning machines, while looms were housed in the upper floors of the back-to-back cottages {Nos 1-8 Clegg Hall Road, now Nos 3-6 inclusive, qv) and probably at Clegg Hall House. The mill was extensively altered in the mid C19 when a steam engine was installed and the boiler house/chimney range added. It was run by John Rhodes in 1848 and by James Tweedale and Sons in 1861. By 1884 Thomas Wilson was processing cotton waste and by 1898 the mill powered 4,500 spindles. In 1916 Robert Bailey and Son produced wadding and absorbent cotton wool {probably for war use) , and by 1923 the mill was run by the Victoria Dyeing Company Ltd.

EXTRA INFORMATION: an important group of buildings which represent the early processes of textile production and developed into a finishing mill by the mid C20. The architectural quality of the sloping canal-side site and the proximity of the earlier hall and housing are significant. (Textile Mills reports: Greater Manchester Archaeology Unit: 1848-1861; ).