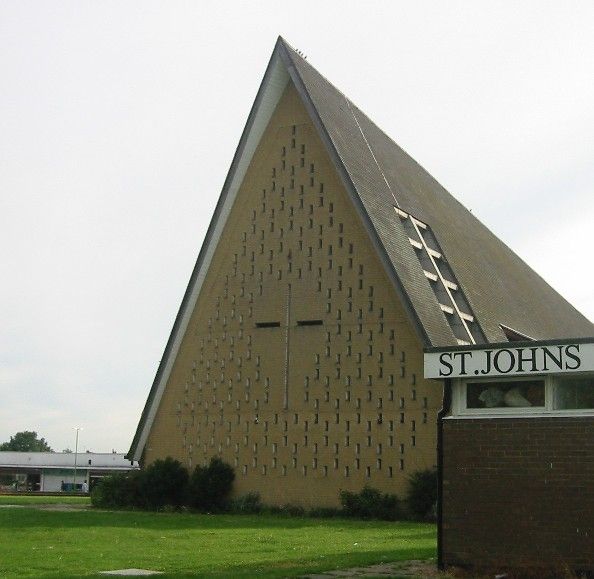 Church. 1958-60 by Peter Bosanquet. Yellow brick to end walls and banded pink and brown brick to side walls. Plain tiled steeply pitched roof, with white-painted weatherboarded eaves. Roof ridge slants upwards towards the liturgical east (Church is actually oriented to face west). Rectangular room church with sanctuary raised on a step and altar raised by two further steps. Choir gallery at liturgical west end, with organ, with vestries and entrance below. Asymmetrical entrance beneath shallow painted concrete canopy. Timber doors in timber and glass screen. Cross pattern in chocolate headers on liturgical west gable; pattern of vertical slits surround a cross on liturgical east wall (slits filled with blue, turquoise and red glass and cross with clear glass). Both east and west walls are canted backwards to either side of a shallow curve, placed asymmetrically. Windows recessed in roof to liturgical north and south sides.
Internally layout is asymmetrical, with aisle to left of centre and pews to left side canted inwards. Roof comprising broad boarded trusses, exposed to the east end and to the upper wall (liturgical north side) and lower wall (liturgical south side) with natural lighting, some of it concealed and some entering on liturgical north side through circular roof lights. Areas of flush varnished plywood concealing the rest of the trusses, with slatted areas in front of further windows on the liturgical north side. Exposed white brickwork and render to east end and exposed white brickwork with chocolate header decoration to low north and south walls, which are slightly battered. Altar placed off-centre to the right, with timber sedilia to right and pulpit, lectern and reading desk to left, all in light timber. Font comprises a smooth stone bowl with a matt finished gold-coloured lid on 3 boomerang-shaped supports; it is located unusually to the liturgical north-east. Altar rails and pews of blond wood. West gallery of asymmetrical design with wall bisected vertically, half being panelled in varnished plywood with vertical slits for the organ pipes behind, and partly painted in a dark colour, against which the organ pipes are displayed. Slender timber balustrade.
An attractive and subtly detailed church which forms a prominent and distinctive landmark in this part of Hatfield. The placing of the altar, font, pulpit and lectern in such close proximity was an early and imaginative response to the ideas of the liturgical movement. Parsonage not included in the listing.