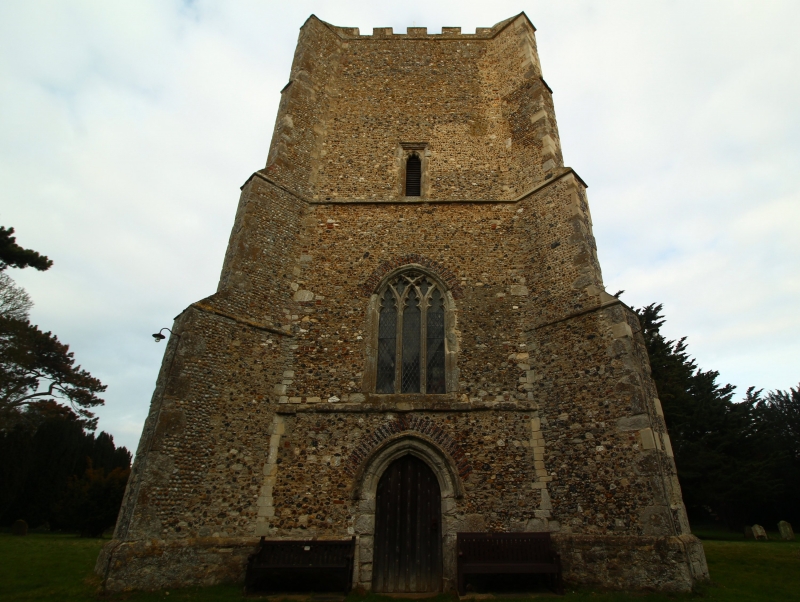 BAWDSEY THE STREET
TM 34 SW
(West Side)
10/21
16/3/66 Church of St Mary
G.V. II*
Church. C14 greatly rebuilt after 1842 when the church was largely burnt
during the letting off of fireworks from the tower on 5th November. Flint
rubble with brick and ashlar dressings, brick, slate roof. West tower,
nave. Tower: originally of 90 feet in height, now reduced to 60. West
face: deep diagonal buttresses which rise to the full height of the
shortened tower. Central doorway to ground floor with moulded ashlar
surround, now much weathered, double-chamfered with hood mould and
voussoirs of mediaeval brick. Stone band above on which rests a 3-light
window with interlaced tracery with cinquefoil heads and daggers above.
Further band at the level of the second buttress offset on which rests a
single-light window, now louvred, with cinquefoil head and hood mould.
Battlemented parapet. South face: blank to lower body but with similar
louvred opening. The right hand buttress has been strengthened with C19
brickwork. North face: similar save for the canted staircase turret at
left. East face: abutts the nave to its lower body. The height and pitch
of the former nave roof can be seen marked in the wall. Sanctus window
opening with ashlar surround, now louvred and serving as a belfry opening.
Nave: before 1842 the church extended further eastwards, after that date
both nave and chancel were combined within the body of the old nave which
was reduced in width so that the old aisle arcades now form the framework
for the new external walls of the building. These arcades appear
externally and are of 4 arches with central octagonal and lateral circular
pillars. The infill is a mixture of flint rubble and brick with brickwork
to either side of the piers and to the top of the wall. South face: C19
windows of Y-tracery to the 2 central arches. Re-set doorway to the left
arch with moulded surround, itself now blocked and partially rendered.
North face: similar save for the absence of the blocked doorway. East
face: shoring buttress to left of brick and buttress at right and a low
central buttress below window which is of two C19 Perpendicular lights with
cinquefoil heads and plate tracery.