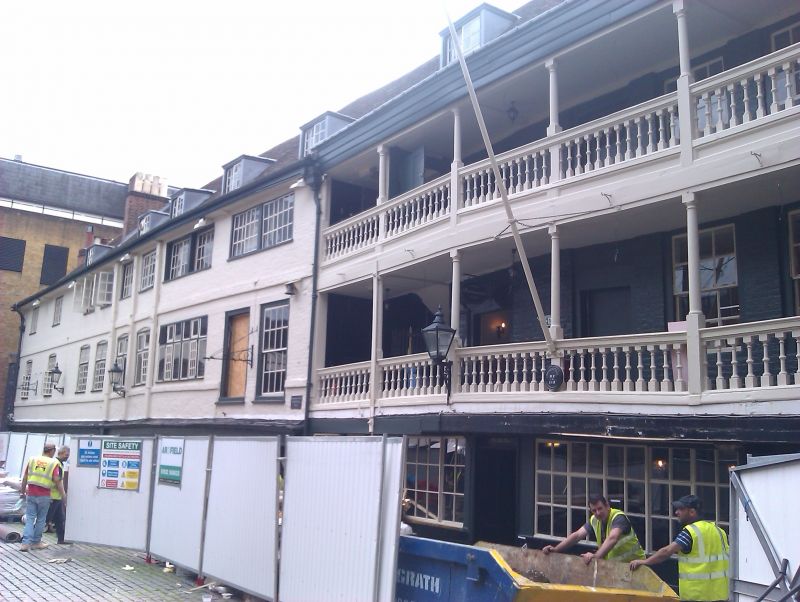 Inn. C17. Timber-frame and brick. Tiled roof. Present
structure formed the south range of a coaching inn ranged
around a quadrangle.
EXTERIOR: 3 storeys with dormers. The west half has 2 tiers of
galleries at the 1st and 2nd floors, the lower supported on
cantilevered beams and the upper on wooden Doric columns. The
wall behind is partly brick and partly timber. There are
windows overlooking the gallery and a staircase at the eastern
end.
The eastern section, with a 9-window range, is chiefly of
limewashed bricks with storey bands. A variety of glazing
patterns, including flush C18 sashes, sliding sashes,
casements and windows with mullions and transoms. Boxed eaves
to the brick range; the galleried section terminates in a
4-part fascia.
The rear or south is reported to be brick faced and features a
large projecting stack. The windows here appear to be the
remnants of an earlier phase of construction.
INTERIOR: early C18 staircase, reset as dogleg staircase
c1730, has barleytwist-on-vase and column-on-vase balusters on
closed string with moulded handrail and heavy barleysugar
newel post. Ground-floor room to front right with fielded
panelling, moulded dado and cornice and bolection-moulded
overmantel over fire-place; simpler panelled room with
straight-cut panelling and moulded cornice to rear right;
similar panelled room with cupboard adjoining early C19 marble
fireplace to front left; similar panelling to three 1st-floor
rooms, with early C19 fireplace to front left. Attic has C18
common-rafter roof, with halved collars; C17 plank door to
cellar, which has reused medieval beams and squared stonework
of possible medieval origins to left side wall.
HISTORICAL NOTE: the original inn dates back at least to the
C16. In addition to its functions as a coaching inn, part of
it came to be used as offices for the Great Eastern Railway
Company, which eventually acquired the entire site from Guy's
Hospital. The north range was pulled down by the Company in
1874. In 1937 it was given to its present owner, the National
Trust.
(The Buildings of England: Cherry B: London 2: South: England: