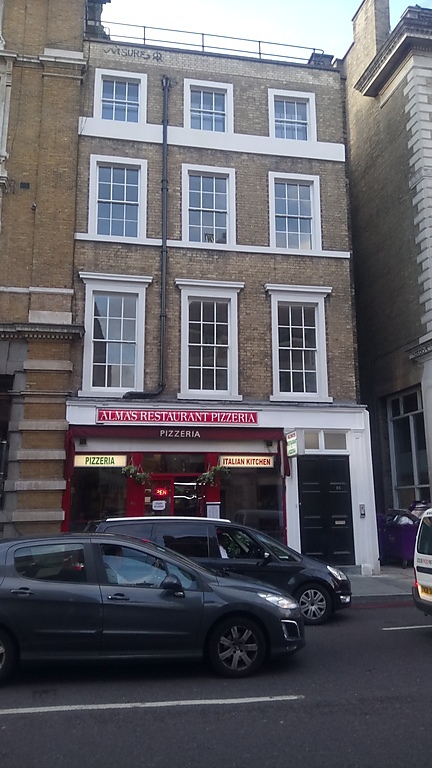 Early C19, residential accommodation over a ground floor shop, re-fronted in the mid-C19 in Italianate style. The C20 shop front is not of special interest.

Early C19, re-fronted in the mid-C19 in Italianate style. The C20 shopfront is not of special interest.

MATERIALS: stock brick in Flemish bond, with stuccoed dressings on the east side only. Hipped slate roof overlaid with bitumen, with end brick chimneystacks.

PLAN: a three-bay frontage with commercial premises on the ground floor and separate residential accommodation on the upper floors, comprising two or three rooms on each floor accessed by a full-height staircase at the south-west end.

EXTERIOR: the east or entrance front has stuccoed bands between floors and the ground floor has a mid-C19 moulded fascia and north side entrance with pilasters, divided rectangular fanlight and double door with three fielded panels on each side. The shop front is of later C20 date. The first and second floors each have three sash windows with six-over-six panes with horns, and stuccoed architraves. The first floor windows are taller and additionally have moulded cornices and window cills. The third floor has smaller three-over-three sash windows. The north side has one early C19 multi-pane sash window on each of the upper floors lighting the staircase; that to the ground floor has been blocked. The south side adjoins no. 32 and is not visible. The west side is mainly obscured by 1B Southwark Street but there is a three-over-three sash window on the third floor.

INTERIOR: the ground floor shop has no visible original fittings. The doorcase on the north side of the east front leads into a narrow passage with a geometrical full-height early C19 painted wooden staircase. This has a mahogany handrail, stick balusters with curved tread ends and a cast-iron partly twisted columnar newel post. Adjoining is an elliptical arch supported on brackets.

The first floor, originally probably interlinking reception rooms, has a south-west corridor with a series of doorcases with four-panelled doors, and cornices decorated with three rosettes. The north-eastern room has a boxed in fireplace, a cornice and dado rail.The larger south-east room has a wooden fireplace with pilasters and cast-iron basket fire grate with rosettes, a moulded dado rail and a cornice, probably of anthemions, palmettes and ovolo moulding. The windows retain folding shutters.

The third floor north-east room has a four-panelled door with a moulded architrave. The smaller south-east room retains a three-over-three pane sash window without horns. A very narrow later staircase gives access on to the roof.

The c 1840 Tallis drawing of the west side of Borough High Street of c 1840 shows a property adjoining the narrow alley way now called Counter Court next door to the Georgian Town Hall (demolished c 1862) in the position of 30 Borough High Street. It is shown as a three storey and attic terraced property with two sash windows, bands between floors, an attic dormer and a shopfront on the ground floor. Census records show that No. 30 has been in residential use throughout its history.

30 Borough High Street, early C19 residential accommodation over separate commercial premises, re-fronted on one side in the mid C19 in Italianate style, is listed at Grade II for the following principal reasons:
* Architectural interest: much early C19 brickwork and a number of sash windows survive, despite the mid-C19 Italianate re-fronting to Borough High Street;
* Interiors: retains an almost complete good quality early C19 interior including a full-height geometrical staircase, doorcases and window shutters, cornices, dado rails, fireplaces and firegrates;
* Plan form: its original plan form of commercial premises on the ground floor with separate residential accommodation on the upper floors - comprising two or three rooms on each floor, including interlinking reception rooms on the first floor, accessed by a full-height staircase at the south-west end - survives intact;
* Group value: with 1B Southwark Street, with which it was historically linked and is still physically linked internally, and other adjoining buildings.