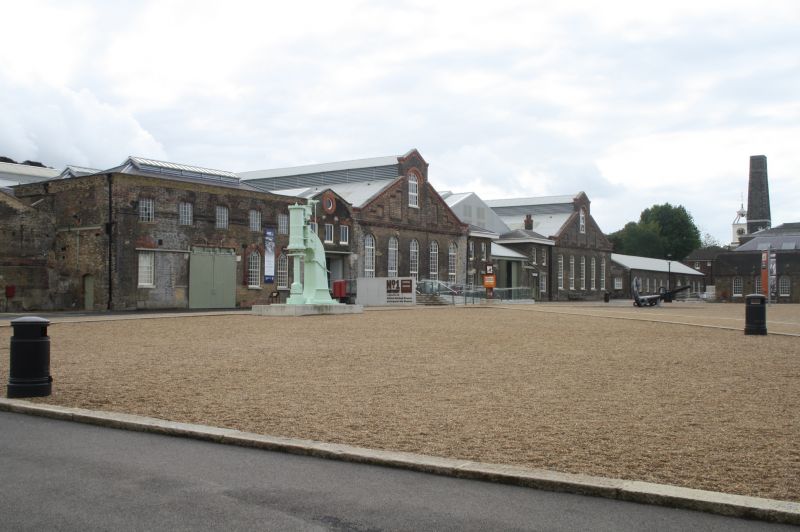 Smithery, now disused. 1805-08 by Edward Holl, architect to the Navy Board; foundry, engine and boiler houses added 1840s and 60s, foundry 1850s-60s; courtyard roofed for steam hammer shop 1865; roof of original ranges replaced and raised with end gables 1888; 1890 main entrance. Disused 1975. Brick with corrugated asbestos and slate hipped roof, and metal roof trusses.
PLAN: original courtyard plan of 3 single-depth ranges, partly closed by Master's and foreman's offices either side of entrance; 1841/2 NE engine and boiler house, 1865/9 boiler houses beyond, 1867 smithery extension linking with 1855/61 iron foundry to the N, and 1869 smithery extension between foundry and boiler houses.
EXTERIOR: W entrance elevation has two 5-window gables, with tall round arched ground-floor windows and another in the centre under the end of the clerestory ventilators with flanking sunken panels, with to the inner sides lower 2-storey, 2-window lodges with slate hipped roofs and 6/6-pane sashes, connected by large double courtyard gates. E elevation has three similar 5-bay gables with a dentil cornice and dentil coping, with round-arched metal-framed windows with tilting casements, stepped recesses and a central louvred oculus. Similar windows to 13- window S side. N extension: on the W side a 5:3-window 1860s range consists of an inner gable with oculus and altered ground floor, to the left some round arched ground-floor windows, segmental-arched above. The N end partly demolished. On the E side a pair of coped gables to the former engine and boiler houses have round-arched openings with red brick arches and lunettes in the gables, with to the N a 3-arch single-storey range with an arcade of round arches, partly infilled. A battered square chimney stands against the original section.
INTERIOR: iron roof trusses and some remaining early C20 pivoting hoists attached to the outer walls, plant includes C20 cupola furnaces. Lodges not inspected. Some sections of original walls dismantled to allow extension of works.
HISTORY: working from the Inspector General Samuel Bentham's office, Holl's original design was for 3 single-storey ranges with lunettes over the lower windows, and clerestory ridges. It was fitted out under the advice of Sir John Rennie, with 40 separate forges with bellows arranged around the walls, each with a hoist. A beam engine was installed in 1841 for hammers and fans to replace the bellows, and a second added in 1842. The 1861 extensions were connected with the construction at Chatham of HMS Achilles, the first iron-clad built in a naval yard, see No.2 Dock (qv).
Although in poor condition, it preserves the original layout as well as later additions, and contains a considerable amount of equipment from the later period of shipbuilding. The smithery was an important part of the working dockyard, increasingly so as metal components replaced wooden ones from the early C19, and in the mid C19 move to all-metal ships. One of three early C19 dockyard smitheries, with that of Bentham at Devonport, and Rennie's 1815 iron-framed smithery at Woolwich (now re-erected at Ironbridge Museum), and a central part of a complete Georgian dockyard.
(Sources: Coad J: Historic Architecture of Chatham Dockyard 1700-1850: London: 1982: 174 ; Coad J: The Royal Dockyards 1690-1850: Aldershot: 1989: 154-156 ; van der Merwe P: The No.1 Smithery, HM Naval Base, Chatham: 1982).