The Catacombs and Terrace in Highgate (Western) Cemetery 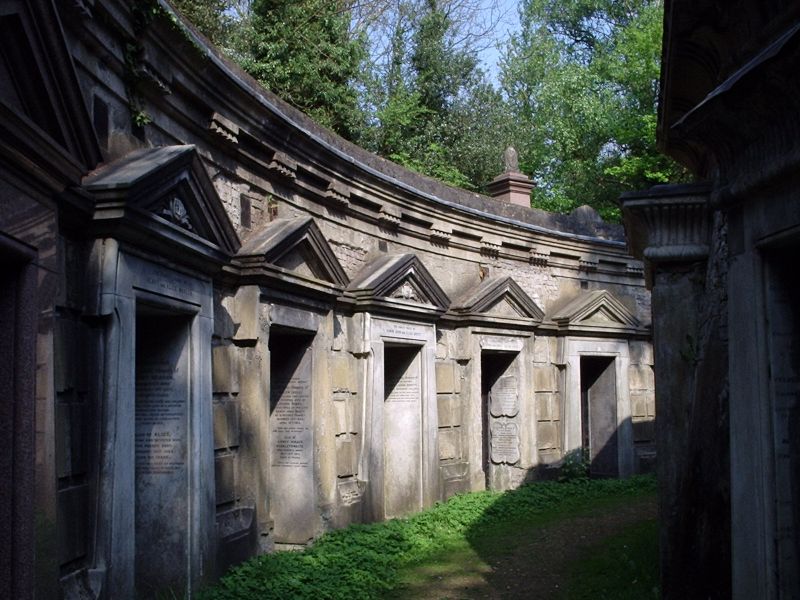 Entry Name: The Catacombs and Terrace in Highgate (Western) Cemetery

Catacombs beneath terrace cut into the hillside. c1838-9.
Possibly by JB Bunning, utilizing and extending the existing
terrace, originally forming part of the garden of Ashurst
House (demolished). Brick with stone entrances. 5 central bays
form canted projection. Piers rise from ground level to form
dies, with gabled stone trefoil caps, to cast-iron traceried
terrace balustrade; polygonal piers at angles. Terrace
approached by flights of stone steps at either end. Central
pointed arch entrance with hoodmould and cast-iron gates
flanked by square-headed architraved doorways with coats of
arms on keystones and cast-iron panelled doors; above,
escutcheons with 4 small light openings.
INTERIOR: brick vaulted and originally lit by oculi set in
terrace. Gallery, more than 80 yards long, lined with separate
recesses, each large enough to take a single coffin end on,
from floor to ceiling down both sides of length, 840 in all.
Apertures sealed with inscribed slabs or small glass
inspection windows.
HISTORICAL NOTE: the catacombs could be used as a permanent
resting place or temporarily whilst a plot was chosen. The
terrace is probably the earliest surviving asphalted building
in the country having originally been surfaced by Claridge;
resurfaced late C20.