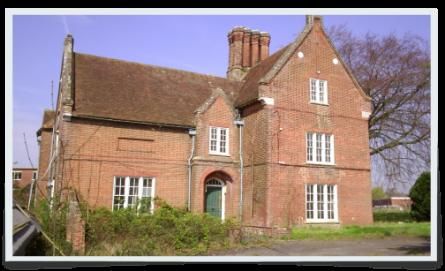 II
Manor house, later part of barracks. Manor mentioned in Domesday Book and part of the existing fabric may date from the time of Edward IV (circa 1480) or earlier but is otherwise of late C16 or early C17 date, extended and refronted in the early C19 with minor alterations later in the C19. Built of red brick, part English bond and part Flemish bond, partly on a stone plinth with stone galleting. Old tiled roof, partly gabled and partly hipped with massive red brick chimney of eight octagonal chimneystacks to left of central gable, two possibly with early C17 fabric, and external chimneystack to west, apparently of C19 date.

Roughly rectangular shape with oldest range to south west, north part substantially late C16 to early C17 and south east range an early C19 addition. Two storeys and attics: three windows to north front. North front has central projecting gable with kneelers and similar gables to ends. Windows are mainly C19 triple casements. South east elevation is of one storey and attics with gabled dormer to right over shallow four-centred arched main door with blank panel to left and triple casement window to ground floor. Return has gable with kneelers. South west range has gable with kneelers to north and the southern part has a hipped roof, C16 English bond brickwork, stonework and a tall external chimneystack, cemented with C19 chimneystacks, obscured by C19 one storey addition. South front of this range has C19 English bond brickwork on a stone base, and C19 triple casements to the lower floors and double casement to gabled dormer. Stone work may relate to medieval building and a cellar is said to exist to the south but there is no access. An early C19 one storey and attic addition links the south east and south west ranges with sash to first floor and plain door beneath.

HISTORY: Manor mentioned in Domesday Book and was afterwards held by the Valoigns family and later the Fogge family. Sir John Fogge lived at Repton during the reign of Edward IV and was Comptroller and Treasurer of the Royal Household and also a Privy Councellor. Circa 1578 Sir Michael Sondes became the owner followed by the Tufton family of Hothfield and Nicholas Tufton was created Earl of Thanet by Charles I c1628. Hasted's "History of Kent" c1800 mentions that a Court Baron was still being held here and "A great part of this mansion in which Sir John Fogge dwelt temp. Edward IV is remaining".

In 1844 the building, called Ripton was occupied by James Olden a tenant of the Earl of Thanet. The building is first shown on a 1640 estate map. The 1844 Tithe Map shows a south wing which was no longer present on the 1871 Ordnance Survey map. Repton Manor became an officers' mess in 1940, became officers' accommodation in 1967 and later the residence of the Commandant and Inspector of Intelligence. In 1975 it became the School of Intelligence Service.