A Grade I Listed Building in Gospel Oak, Camden 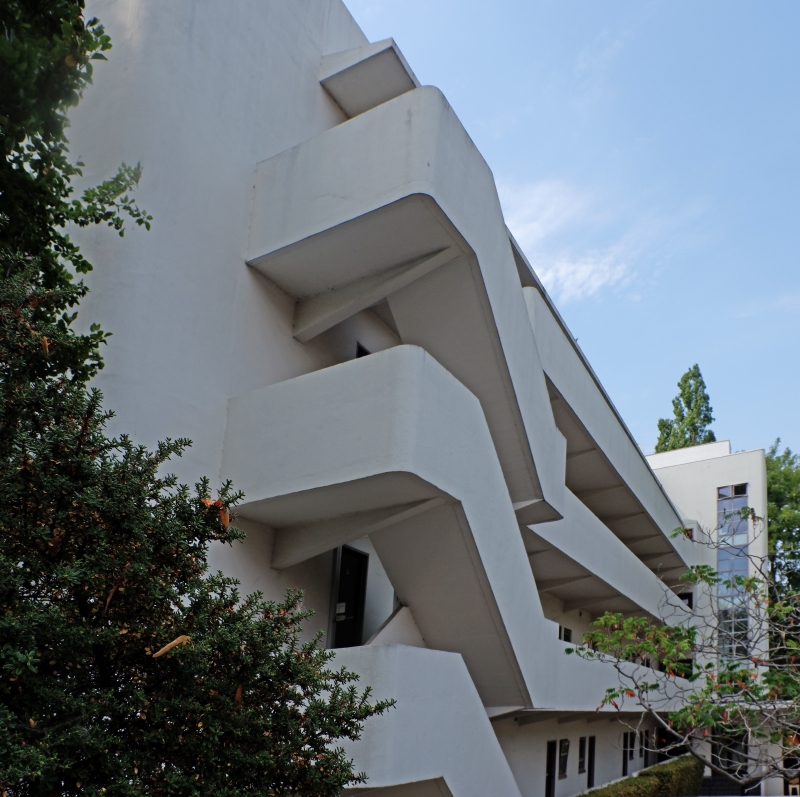 Block of 36 flats. Designed 1929-32, built 1933-34. By Wells
Coates, for Jack & Molly Pritchard and incorporating many of
the latter's Venesta plywood manufactures. Monolithic
structure in reinforced concrete with cement wash finish
applied direct to concrete. Flat roof. Metal windows.
PLAN: each floor has six one-room `minimum' flats, two with
balconies; one studio with balcony and one one-bedroom flat on
each of the main floors, with penthouse for the Pritchards and
separate penthouse for their children on the roof. Ground
floor originally with kitchens and staff flat at entrance in
place of studio, converted in 1937 by Marcel Breuer and F R S
Yorke into the Isobar, and in the late 1960s into four small
flats not of special interest.
EXTERIOR: 4 storeys and penthouse. Main elevation with
continuous solid cantilevered access/circulation balconies
linked by diagonal external stairs to left. Levels gained to
the right by a stair tower with double door entrance
approached by steps under a projecting canopy; stairwell lit
by vertically set windows, originally one single window,
having horizontal lights. Attached garage to right. Left hand
return with 3-light casement and fixed windows to each floor.
Rear elevation has similar grouped windows and projecting
balconies to 3 bays.
INTERIORS: the flats were originally conceived as `minimum
flats', designed to offer a cheap but more independent
alternative to `digs'. They originally had space-saving fitted
furniture and closets. Most flats retain original fitted
kitchens, dressing rooms and bathrooms by Coates. Studio flats
retain semi-open screens or bookcases separating the living
and sleeping areas. The larger Penthouse flat retains plywood
floors and skirtings, and full range of fitted bedroom
furniture probably designed by as well as for Jack Pritchard.
HISTORICAL NOTE: the Pritchards intended that the flats be a
collective of units for single professionals, the "minimum
flat", with a few larger flats and studios. The Pritchards
originally intended to build a house for themselves on the

site, and instead had separate penthouses on the roof for
themselves and their children. Their dynamic lifestyle set the
tone of the block, which attracted not only young architects
and writers but also the refugee architects from Germany and
eastern Europe whom Pritchard was instrumental in bringing to
Britain from 1933 onwards. The design was conceived as service
flats with a main kitchen and staff quarters on the ground
floor north end; this was converted 1936-7 by Marcel Breuer
and FRS Yorke into a residents' club known as the Isobar; now
converted to four extra flats. During the early years it was
the home of many avant-garde designers, artists, writers and
poets. Marcel Breuer, whose furniture designs were produced by
Pritchard's Isokon Laminated Furniture company, lived there
when he became a refugee from Germany as did Walter Gropius
and his wife and others fleeing Fascist Europe. Isokon Flats
are of both architectural and social significance. They were
the first major architectural work of Wells Coates, one of the
leading activists in the creation of the Modern Movement in
Britain in the 1930s, and were the first block of flats to be
built in Britain in the fully modern style. It was also the
first modern movement building of any kind in an easily
accessible location in Britain, and attracted considerable
attention.
The Lawn Road flats are of great importance as an expression
of 1930s' minimal living, at the only time when living in
flats was fashionable. They are not only the first modern
movement flats in Britain, but the only ones to retain
important interiors.
(Cantacuzino S: Wells Coates: London: -1978: 51-63).