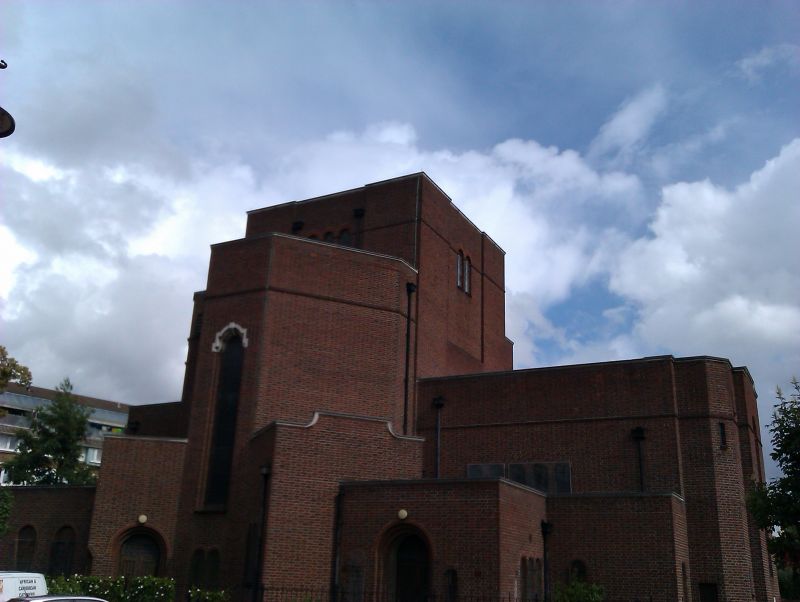 Parish church. 1953-4 to the designs of Arthur Campbell Martin, completed after his death by Milner and Craze. Red brick exterior with limited stone decoration, concrete vault; roofs not seen. Near cruciform plan of nave, broad transepts and chancel set around a central square domed crossing, with pronounced corner angles, one a porch, and semi-domed apse flanked by vestry and Lady chapel. Byzantine style more reminiscent of the 1930s than the austere modernism of the early 1950s. Stone cornices, those to chancel and chapel with stepped motif, the former surmounted by a cross. Narrow round-headed lancets in brick surrounds, some in pairs or groups (five to nave). Longer windows to transepts with double-curved heads. Stone architrave surrounds to apse windows. Long, blind west lancet. Principal entrance from south, through double round-headed porch with central stone column and cushion capital, through simple double timber doors. Foundation stone LAUS DEO, 28th March 1953'.

Interior is similarly simple, but high and light. Three-bay nave with narrow aisles defined by round arches and columns with cushion capitals. Organ in west end recess, octagonal font with shallow moulding and cover, original chairs. Narrow passage aisles continue in chancel, linked by ambulatory around transepts, denoted by arched openings in angles and by paired arched openings below set between paired columns. Chancel with choir stalls and steps to timber altar rail. Original altar in sanctuary has high reredos with tester. Glass in the East windows is by D Marion Grant, 1956, and in the Lady chapel by Robert Hendra, 1962. Lady chapel is entered via angle of south transept, with giant columns at its entrance, and mural decoration on East wall. Its windows are set in pairs by smaller columns in similar style.

The columns with their cushion capitals give a dainty, charming feel to this strongly massed church with its prevalent round-arched motif. The original St Luke's was built in 1876-7, from designs by J E K Cutts, but was bombed. Martin had already designed St Olave's Mitcham, for the Southwark Diocese, in 1931. However, he is best known for his listed St Luke's, Milber, Devon, designed for his younger brother, the Reverend Keble Martin, who is said to have conceived its Byzantine plan with an apse, and angled transepts of equal size to the nave, in a dream. The church was built to the older Martin's designs in 1931-63, and serves as a model on a larger scale for St Luke's, Camberwell. Arthur Martin (1875-1963) also remodelled the chapel at the Royal Military College, Sandhurst, and was architect to the Duchy of Cornwall 1927-52. This is his principal post-war work.