A Grade I Listed Building in Hollingbury and Stanmer, The City of Brighton and Hove 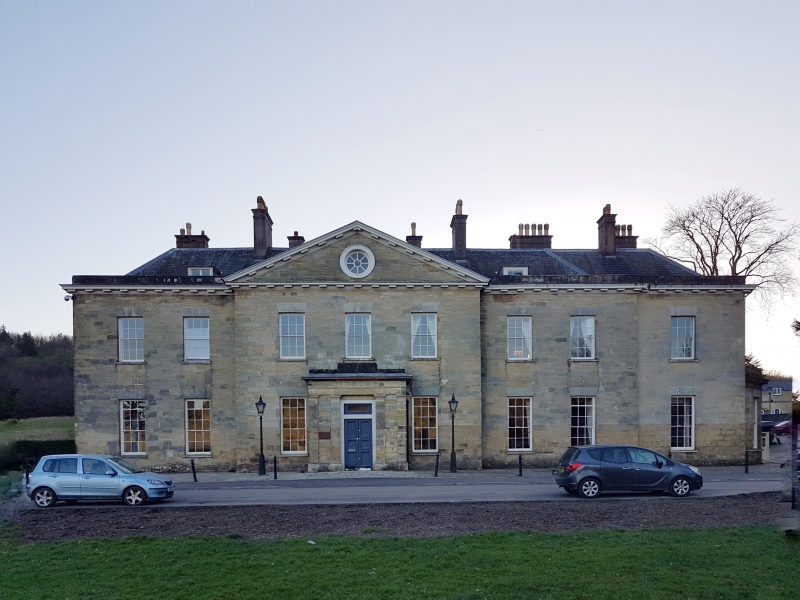 Country house, now in the care of the local authority.
Principally of 1722-7, though incorporating part of an earlier
house, and with additions of the early C19 and of 1860. The
architect was Nicholas Dubois, for Henry Pelham and later for
his brother, Thomas Pelham, at a cost of »14,000. Brick, faced
with cream-coloured sandstone ashlar to the principal (that
is, north-east and south-east) fronts and to the immediate
north-west return, the rest mostly rendered; roof of slate.
EXTERIOR: 2 storeys with attic; the entrance front, facing
north-east, was originally of 7-window range with a
centrepiece of 3-window range; an 8th bay was added to the
north probably in 1860. Early C19 enclosed porch decorated
with banded rustication and with Tuscan pilasters supporting
an entablature and blocking course, the blocking course raised
at the centre; flat-arched entrance with overlight and double
panelled doors of original design. All windows flat-arched;
the centrepiece projects slightly and is pedimented with an
oculus in the tympanum; modillion eaves cornice. The
additional northern bay matches the rest of the front and
there is a single-storey canted bay window to the return, with
a pierced parapet; hipped roofs and corniced stacks.
The south-east (or garden) front is of 9-window range and the
central range of 5 windows has an additional attic storey; the
cornice over this part was missing at the time of inspection.
The courtyard plan which used to incorporate parts of the
earlier house has been demolished, leaving 2 wings at right
angles to each other.
INTERIOR: the entrance hall, of the 1720s and in 'Board of
Works' style, is plastered from floor to ceiling in imitation
of wooden, fielded panelling; 2 flat-arched doorways to either
side with architraves, pulvinated frieze and dentil cornice to
overdoors, and 6-panelled doors with fielded panels; between
these on the left side is a round-arched niche, and on the
right, a massive fireplace and bust, recorded in the list
description of 1986 but boarded up at the time of inspection
in 1991; in the wall facing the entrance, a round-arched niche
on either side of a simpler, flat-arched doorway giving on to
the staircase hall. The staircase hall is plastered more
simply, the plaster removed from the south-west wall at the
time of inspection; open well stair by Nicholas Dubois with
curtail step, newels square in plan and with Corinthian
detailing, turned balusters, moulded, wreathed and ramped
handrail, open string carved with foliage, and wooden panelled
dado. Library to right of entrance hall, also by Dubois, with
fireplace boarded up at the time of inspection and
egg-and-dart mouldings to bookcases and to architraves,
reveals and panels of double doors to library extension in
northernmost room, of c1860, which has egg-and-dart mouldings
to the bookcases, cornice and paterae to ceiling moulding, and
fireplace now boarded up; business room to rear, now divided
in 2, with panelling of 1720s.
Left of the entrance hall is the Little Drawing Room, panelled
in wood with fielded panels and coved cornice, with south
doorway having panelled reveals, and pulvinated bayleaf frieze
and dentil cornice to overdoor; fireplace now boarded up. The
Drawing Room beyond belongs to James Wyatt's work for Thomas
Pelham II in 1775, with dado rail of acanthus ornament,
elaborate neo-Classical frieze and ceiling decoration,
architraves to doorways carved with guilloche ornament, the
overdoors having rosettes in wreaths of husks, and the door
panels carved with flutes; fireplace now boarded up. The
Dining Room, of c1735, has wooden dado, ornate frieze of
festoons, modillion cornice and ceiling decorated with
arabesques and fruit; chimneypiece flanked by bay-leaf
ornament, fireplace now boarded up; at the south-east end, a
screen of coupled Corinthian Columns distyle in antis; door
architraves and panels carved with egg-and-dart mouldings,
overdoor decorated with festoons and dentil cornice.
The first-floor landing has fielded panelling (some of which
had been removed from the north-west wall at the time of
inspection), with Vitruvian scroll to dado rail, and coved
cornice; Ionic pilasters flanking windows and passage;
fireplace now partly removed, leaving cast-iron early C19
grate; fielded dado to passage. The State Bedroom on the
north-east side is panelled, with coved cornice and elaborate
rocaille fireplace. North of this, a room of similar size with
plainer panelled dado, coved cornice, doorways with
egg-and-dart mouldings to architraves and overdoors with
pulvinated frieze of bayleaf ornament and dentil cornice;
fireplace removed. At the north corner, a smaller room with
cornice and C19 fireplace. Dressing room south of the State
Bedroom with plain dado, coved cornice, and a fireplace
surround with shouldered architrave and rocaille frieze.
South-east bedroom, now subdivided, has panelled dado with
Vitruvian scroll, coved cornice, 2 doorways with egg-and-dart
mouldings to the architrave, and pulvinated bayleaf frieze and
dentil cornice to overdoor; fireplace surround with
neo-Classical ornament of urns and festoons, and C19 cast-iron
grate.
Rear staircase at south-west corner is open well to 2 storeys
with a turned newel at the bottom and square newels at angles,
turned balusters, moulded and ramped handrail and open string.
Central first-floor room to south has panelled dado with
Vitruvian scroll, coved cornice, fireplace and chimneypiece
now boarded up; dressing room with panelled dado with
Vitruvian scroll, coved cornice and early C19 cast-iron grate.
Bedroom to south-west corner with moulded cornice and
fireplace surround of late C18 or C19 date. Dogleg stair in
north-west wing to 2 storeys with curtail step, stick
balusters and ramped handrail as far as landing between first
and second floor, then square newels, turned balusters and
moulded handrail for one flight.