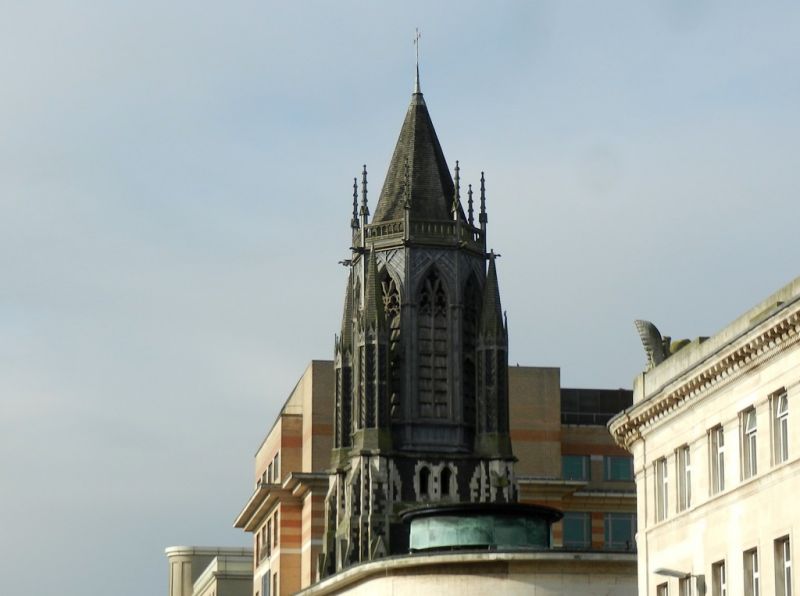 Anglican church. 1846-8, designed by Richard Cromwell
Carpenter and built by George Cheeseman; the tower and spire
by Richard Herbert Carpenter, 1873-5; narthex of 1887, and
fishermen's institute at the west end, both by George
Frederick Bodley; on the south side of the church, a covered
way leading to the west end, by Bodley, remodelled by John
Leopold Denman, 1937. Knapped flint with limestone dressings,
wood, lead, roof of slates and tiles.
PLAN: chancel under lower roof, nave, north and south aisles,
north tower at the junction of chancel and nave.
EXTERIOR: angle buttresses to chancel; 3 bays to south with 3
pointed-arched windows of 3 lights with curvilinear tracery
and buttresses between; small gabled chapel alongside the 2
westernmost bays of the chancel, its east window of 3 lights
with curvilinear tracery; east window to south aisle partly
obscured. Principal entrance in east face of tower:
pointed-arched portal with clustered columns and elaborate
moulding to arch, embracing 2 segmental-arched entrances with
foliage architraves; the trumeau acts as a corbel to a statue
of St Paul in the tympanum, the rest of which is filled with
roundels depicting scenes from the life of St Paul. The tower
has angle buttresses and rises sheer to the belfry
unarticulated apart from 2 plain stone bands; paired ogee
lights to the belfry, and above them the tower and spire are
constructed of wood sheathed in lead; the tower is octagonal
with tall 2-light, one-transom windows to each face with
geometrical tracery; buttresses crowned by pinnacles at each
corner; balustrade with most details missing; short spire.
Walls to street either side of east end: flint banded and
coped with dressed stone, with a gabled pier to north end;
these walls originally enclosed a forecourt, and were rebuilt
in their present position following street-widening in the
1930s.
INTERIOR: the interior of the church is plastered. The chancel
has fragments of a painting of c1860 on either side of the
reredos and fragments on stencils on the north wall. It is
paved with encaustic tiles by Minton's, using an early
decorative design in the sanctuary and down the centre of the
choir, and red and black alternating tiles for the rest. The
chancel windows are framed by engaged colonnettes and
archivolts. Painted decoration to the ceiling, with banded
ribs, bosses and sacred emblems, designed by GF Bodley c1905.
Organ by Hunter and Sons of Clapham, 1893, with crocketed and
embattled pinnacles; choir stalls decorated with blank
cinquefoil arcading and carved misericords.
Chancel arch of 3 clustered columns with foliage and
double-chamfered arch; rood screen with cinquefoil tracery to
the arcade by RC Carpenter; the figures of saints painted on
the lower panels by S.Bell, the vaulted canopy and rood
designed by GF Bodley and executed c1910. Wall painting over
the chancel arch, Christ in Glory, by S Bell. Nave of 6 bays
with quatrefoil columns and double-chamfered arches; timber
roof with arched braces carried on carved corbels, and 3
layers of curved wind-braces.
The north and south aisles have details and openings not
visible from the outside of the church; south aisle: one
pointed-arched entrance, now blocked, an east window with
quatrefoil tracery and 6 windows to the south with trefoil
tracery; north aisle: pointed-arched entrance to vestry at
east end with chamfered piers and archivolt, a shoulder-arched
entrance and 5 windows with trefoil tracery in the north wall,
and one window in the west wall. Both aisles have lean-to
roofs with braces carried on carved corbels.
Chapel of the Holy Spirit, at the south-east corner, now a
store, with panelled dado and glass to the lantern by CE
Kempe.
All the stained glass in the chancel, nave and aisles, apart
from the window over the former entrance in the south aisle,
was designed by Augustus Welby Northmore Pugin c1848, and
made by Hardman and Co.; the Tree of Jesse in the east window
and the figures of St Paul and his companions in the west window
are particularly notable, and have been repaired and refurbished
by David Lawrence, 1990-91. It is most unusual to find a church
almostall of whose windows are filled with stained glass of one date
by Pugin and Hardman.
Pulpit by RC Carpenter, octagonal and of wood, decorated with
blank tracery and painting in panels, standing on a stone
octagonal shaft; the tester added c1960. Elaborate early C19
Neoclassical communion rails, from a church in Edinburgh; and
rails of similar style and date behind the central altar from
the Convent of St Mary, Rottingdean. Alabaster memorial to Fr.
AD Wagner, designed by GF Bodley, c1902, not visible at the
time of inspection. Early C16 retable in the south aisle; and
on the south wall of the south aisle, a small bronze and
enamel memorial to William Bainbridge Reynolds and his wife,
presumably by Reynolds, c1935. Octagonal stone font by RC
Carpenter, plain apart from a small panel carved in low
relief. In the narthex, 2 groups of 4 trefoiled windows in the
west wall and one sexfoil window in the south wall with glass
by Charles Eamer Kempe.
Fisherman's institute: fireplace with massive,
segmental-arched canopy designed by GF Bodley; panelling of
1937. The main part of the covered passage to the south,
remodelled by JL Denman, has a low timber roof with
pointed-segmental arches and decorative leading to the
windows.
HISTORICAL NOTE: St Paul's was paid for by the Rev. HM Wagner,
and his son, the Rev. AD Wagner, was its first perpetual
curate and later its vicar. It was designed to serve the
poorer community in the western part of the town and was the
first centre of the Oxford Movement in Brighton.
(Carder T: The Encyclopaedia of Brighton: Lewes: 1990-; School
of Architecture and Interior Design, Brighton Polytechnic: A
Guide to the Buildings of Brighton: Brighton: 1987-; Pevsner N
& Nairn I: The Buildings of England: Sussex: Harmondsworth:
1965-; St Paul's Church Brighton: A brief history and guide:
Brighton).