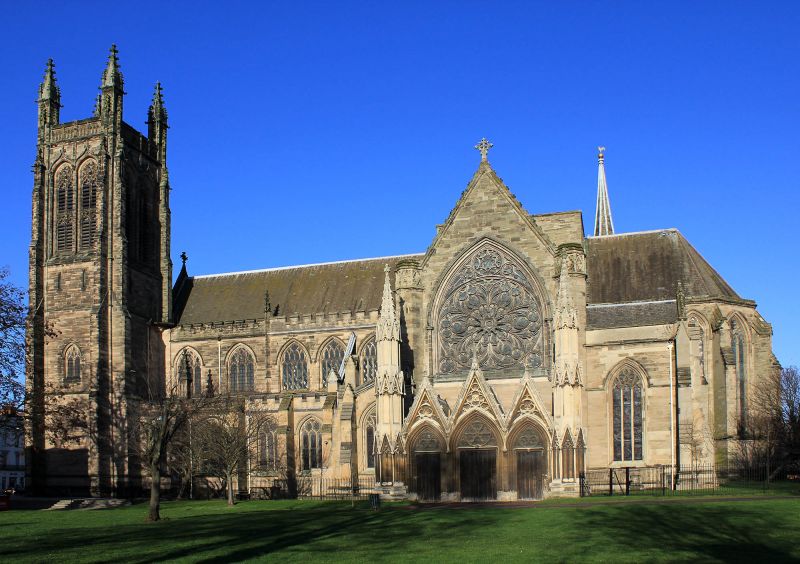 Church. 1843-1869, with later additions and alterations and
incorporating north transept wall of 1825. By JG Jackson, of
Leamington, with the vicar, Dr John Craig; 1867 south transept
by TC Barry; with additions and alterations of 1889, including
chancel screen donated by Sidney Flavel Jr; and additional 2
west bays of nave and south-west porch and tower of 1892-1902
by Sir A Blomfield. 1986 addition of Urquart Room and Parish
Offices to west end of nave. Ashlar with Welsh slate roof.
STYLE: French Gothic.
PLAN: 4-stage south-west tower with porch; 6-bay nave with
clerestory and aisles, nave has north-west turret; 2-bay
transepts, to north transept an entrance, also an east turret
with clock with steeple, and to south transept an entrance
with Galilee porch; apsidal chancel with north Lady Chapel and
south Chapel of All Souls.
EXTERIOR: chamfered plinth, moulded band; stepped buttresses
to aisles and tower; battlements. Tower: west entrance porch
to lower stage: a plank door in hollow-chamfered,
pointed-arched surround with foliage to spandrels and
architrave with traceried decoration; above a 3-light window
to each side. Second stage: band, 2-light windows. Third
stage: band, slits. Fourth stage: band, tall, 2-light belfry
openings, band, low parapet with pinnacles with finials to
angles. Nave: to west end a tall, 5-light window; aisles, 2
windows to west have 4-centred arches, otherwise
pointed-arched, 5-light windows. Clerestorys have 5-light,
pointed-arched windows. Transepts: rose window to each end,
that to south derived from Church of St Ouen, Rouen, that to
north derived from Rouen Cathedral. To east and south ends of
south chapel are tall, 3-light, pointed-arched windows. Apse
has 5 tall 3-light windows.
INTERIOR: balcony to west end. Column clusters to nave and
transepts with treble-chamfered, pointed-arched arcade with
roll-moulding to head. To transepts are 4-centred-arched
openings with traceried frieze above, and within to north-east
a tall pointed arch with double-chamfered, hollow moulding,
containing organ. Carved reredos based on Last Supper. Hammer

beam roof. Medieval effigy of an abbot in north porch. Wall
tablets dating back to 1808. Apse stained glass, 1851, by
Chance of Birmingham.
HISTORICAL NOTE: Bath Street was a main street of the C18
village of Leamington.
All Saints Church forms part of a group which includes
Victoria Bridge, Parade, the Royal Pump Room and Baths, Parade
and Victoria Terrace (qqv).
(The Buildings of England: Pevsner N and Wedgwood A:
Warwickshire: Harmondsworth: 1966-1990: 333-4; Cave LF: Royal
Leamington Spa Its History and Development: Chichester: 1988-:
138-140).