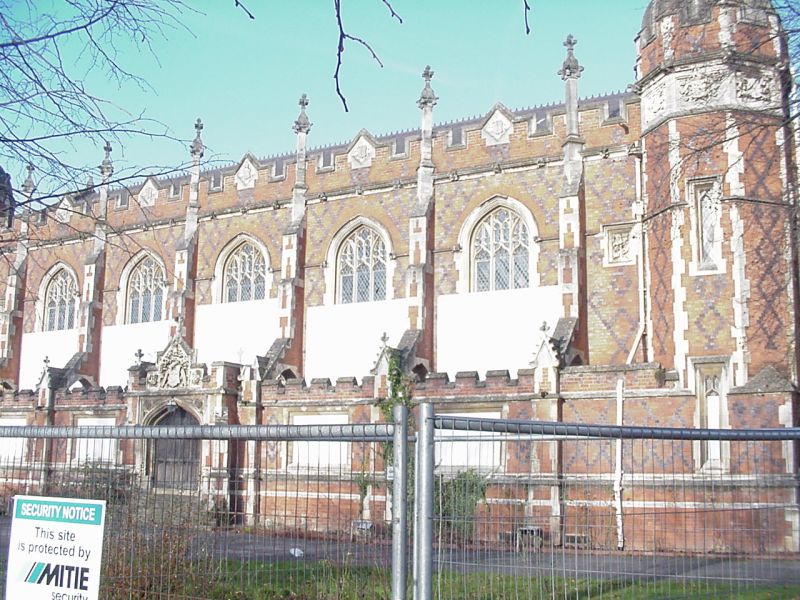 School. 1847-8 by DG Squirhill of Leamington, with later
additions and alterations including chapel to rear of c1867
with stained glass in the apse by Holland of 1858, and
gymnasium of 1893. Pinkish-red brick with purple brick and
ashlar dressings, with Welsh slate and lead roofs.
STYLE: Tudor Revival.
EXTERIOR: 2 storeys, 9 bays with basement to left and further
entrance range to left, 3 extensions to rear.
Main range: to centre 7 bays a single-storey arcade projects,
to second and eighth bays are tall, octagonal turrets, then
outer gable-ended bays. Chamfered plinth, continuous moulded
sill band. Off-set buttresses between bays have pinnacles.
Diaper pattern brickwork to facade.
Ground floor. Central entrance projects: 4 steps to 4-centre
arched double doors with linen-fold panelling and traceried
decoration to head, in 4-centre-arched surround with
roll-moulding and with quatrefoil decoration in the spandrels;
hoodmould has face stops of Sir Francis Bacon and Sir Thomas
More; angle buttresses, upshot with the Jephson arms. Arcade
has buttresses and battlements; four 3-cusped-light windows in
straight-headed, quoined surrounds; band. Turrets have single
lights.
Outer bays have 4-cinquefoil-light windows with
straight-headed surrounds; blind arcades above with coats of
arms of benefactors, the Willes, Wise, and Fontayne-Wilson
families.
First floor: centre range has tall, 6-light windows in two
stages with perpendicular-type tracery to heads and continuous
hoodmould; turrets have lancet lights in double-chamfered
surrounds and continuous hoodmoulds to 3 sides; outer bays
have 4-light windows with perpendicular-type tracery to heads
in straight-headed surrounds, outer bays have continuous
quoined surround through ground and first floors. Battlements
to centre range, ogeed tent roofs to turrets, and to end bays
are pointed gables with carved plaques. Chamfered copings.