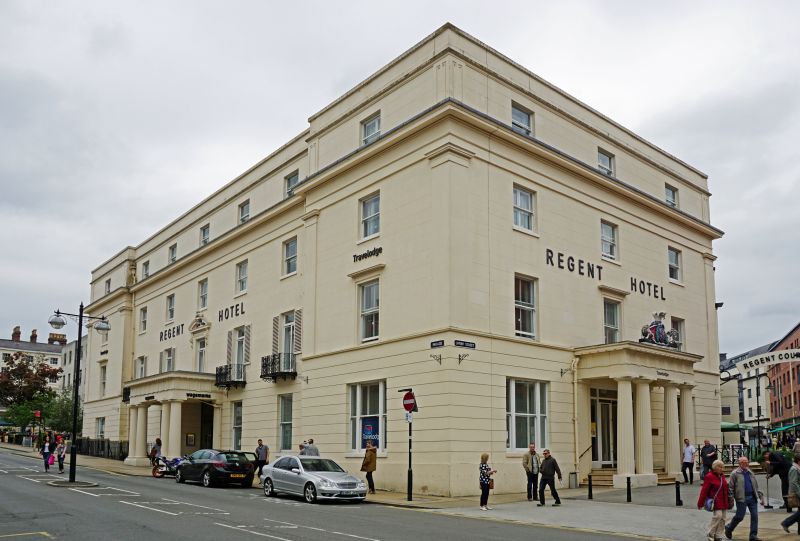 Ground floor, entrance: central tetrastyle Doric porch with
full entablature, above, a lion and unicorn with Prince of
Wales feathers. Doorway with multi-pane glazing. Tripartite
windows, to left a 1/1 sash between narrower 1/1 sashes, to
right with multi-pane glazing. All windows in plain reveals,
those to ground and second floors with sills.
Range to rear has mainly 6/6 sashes with plain reveals and
sills.
Left return (formerly garden facade), main range: 4 storeys, 9
first-floor openings. First, second and third floors have 1/1
sashes, the second and seventh bays are blind. Ground floor
has part-glazed doors to fourth bay with divided overlight,
otherwise tall 1/1 sashes. All with plain reveals, those to
second floor with sills.
Rear range has four 6/6 sashes with flat arches, plain reveals
and sills.
INTERIOR: imperial staircase with decorative cast-iron
balustrade of three balusters, then scrolling heart and
paterae motif. Marble and cast-iron fireplaces to several
rooms, shutters now painted over, 6-panel doors, cornices.
Ground floor has elaborate Edwardian rococo revival and
Georgian Revival plasterwork and marble fireplaces to main
reception rooms.
HISTORICAL NOTE: the foundation stone was laid by Miss
Greatheed, in front of Sarah Siddons, the actress. The hotel
opened as Williams Hotel, but 3 weeks later was renamed The
Regent by permission of the Prince Regent (later George IV).
When built, the hotel was one of the largest in Europe.
Visited by Princess (later, Queen) Victoria in 1830, by the
Duke of Wellington in 1827, John Nash, Prince Louis Napoleon
(later Napoleon III), and Empress Eugenie in 1860 and by a
large number of notable C19 figures.
(Cridlan FJ: Regent Hotel Royal Leamington Spa A Biographical
Booklet: Royal Leamington Spa: -1984; Cridlan FJ: The Regent
Through the Years: Royal Leamington Spa: -1992; Roth D: Early
C19 Decorative Ironwork: a study based on Leamington Spa:
1976-: P.79,80; FIGS.107-8.; Cave LF: Royal Leamington Spa Its
History and Development: Chichester: 1988-: 38, 55, 63-5).