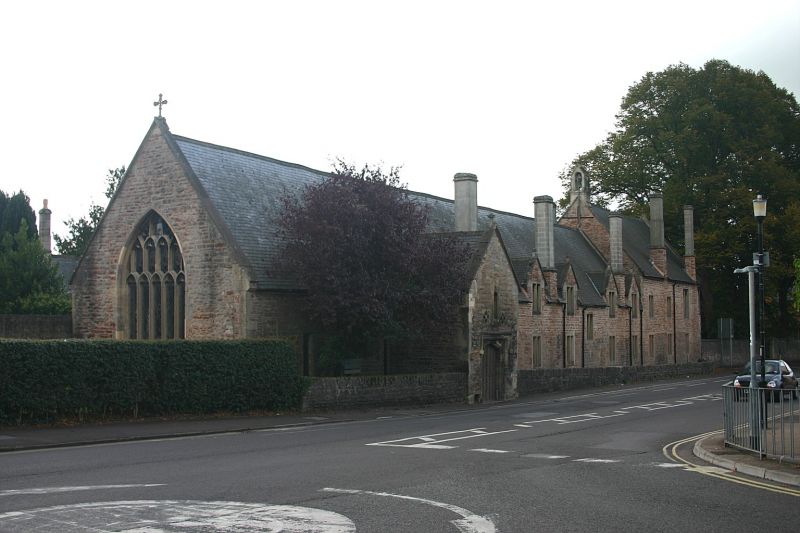 Also known as: Bubwith Almshouse CHAMBERLAIN STREET.
Almshouses. Begun 1436, extended in 1614 and 1638, major
restoration of 1884. Local stone rubble with Doulting stone
dressings, Welsh slate roofs with stone ridge and coped
gables, tall ashlar chimney stacks on rubble bases.
PLAN: complex plan of medieval north wing, with attached wings
of 1884 and 1614 extending southwards, a detached south range
of 1638 and additional detached central block apparently of
1884.
EXTERIOR: north wing of hall, chapel, and rooms is single
storey with attics, with an elevation to Chamberlain Street of
13 bays. Bays 1 and 2 are the chapel, part of the C15
foundation. This has a large 5-light Perpendicular E window,
heavily restored, and on the N side are a small single light
with chamfered surround and a 3-light cinquefoil cusped window
to bay 2.
Bay 3 has the projecting gabled entrance porch with a pair of
doors in a 4-centred arch with plain spandrels and square
label under a statue niche; there is a cast-iron footscraper
left of the doorway.
Bays 4, 5, 6, 7, 9 and 10 have 2-light chamfer-mullioned
windows, probably C19 restorations, with small pane iron
leaded casements, the attic windows have small gablets with
carved finials; tall chimney stacks between each pair. Bay 8
has one similar window at mezzanine level.
Bays 11, 12 and 13 are taller, with a bell turret to east
gable-this is the hall, which had a second floor inserted in
c1850, fenestration similar, but upper bay 13 has a 2-light
cinquefoil cusped window.
The west gable of the hall has a 3-light Perpendicular tracery
window at first floor level, with a C20 door and window
below-thereafter is the first of the two 1884 wings, replacing
a 1614 wing, and behind it the second wing.
The south range, 1638, building is a building of remarkable
design. It is small in scale, of one storey with attic, in 5
bays, with a symmetrical elevation facing the churchyard of St
Cuthbert (qv). 2-light ovolo-mould mullioned windows with
labels to upper bays 2 and 4 and lower bays 1, 2, 4 and 5.
Between bays 1 and 2 and bays 4 and 5 are cambered-arched
doorways with labels and square recesses with labels over.
Bay 3 has an ornamental 4-seat sedilia with a mixture of
Gothic and Classical detailing. To the left of this range is a
free-standing range of 1884, with its gable to the S,
including a commemorative tablet indicating that the building
replaces one of 1614.
INTERIOR: the chapel has a 4-bay roof in heavy moulded
arch-braced trusses carried on octagonal posts to stone
corbels, with 3 purlins, and 4 ranges of curved wind-braces;
in the first 3 bays the purlins are moulded, in bay 4 they are
chamfered and stopped.
This roof construction also continues to the W beyond the
chapel. The 5-light east window of c1850 by Bell of Bristol.
The lower part of the screen at the W end has C17 panels. To
the right of the chapel entry is a bay with late C20 staircase
and sub-division.
The private rooms not accessible, but considerable C19 and C20
modification has been made.
Medieval hall roof not seen. Chapel roof has having shafts
supporting the truss foot similar but more elaborate than The
Rib's at 3 St Andrew Street (qv).
HISTORICAL NOTE: the original buildings were built in 1436
from an endowment by Bishop Bubwith, (d.1424), and had 12
inmates. They were extended by Bishop John Still's (d.1608)
bequest in 1614, and again, for four people, in 1638. There
were sundry C18 and C19 benefactions, with major additions in
1884.
The range of buildings is extensive, closing off the N side of
St Cuthbert's churchyard, and like the Vicars Close (qv) and
The Rib was heated by fireplaces.
(The Buildings of England: Pevsner N: North Somerset and
Bristol: London: 1958-: 329).