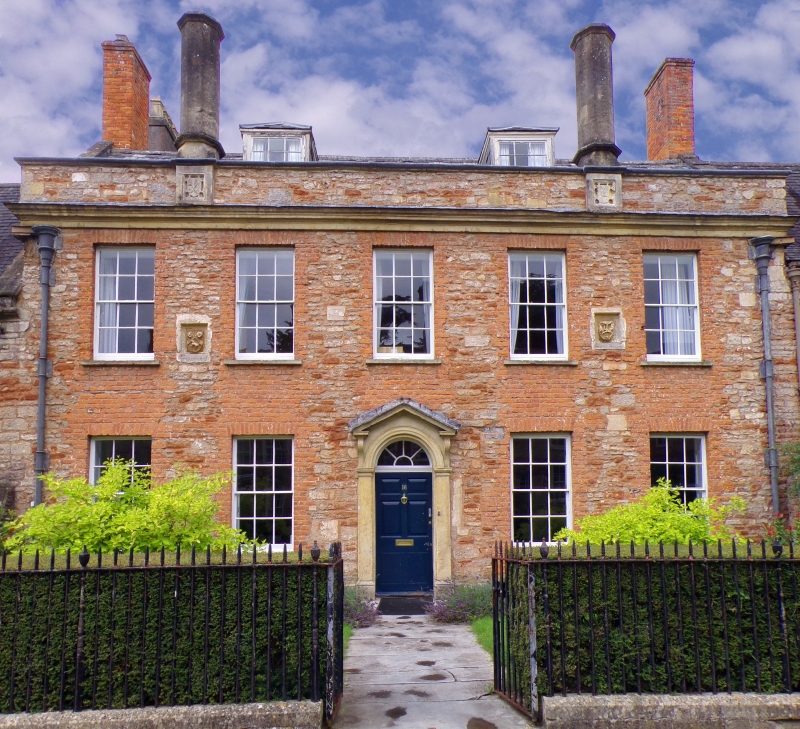 Terrace of 14 houses, originally 23. From c1360, for Bishop
Ralph of Shrewsbury, the chimney shafts renewed in C15,
probably for Bishop Bekynton, and various rear extensions of
C16, C17 and C18; considerable refenestration in C18 and early
C19. Major restoration 1976 to 1983, recorded on a plaque on
boundary wall to E side (qv), near the S end.
Rough squared local rubble, Doulting ashlar dressings and
chimney shafts, slate to front roof slopes, pantile generally
to rear, but Nos 27 and 28 have scalloped tiles on the front
slopes.
PLAN: each house had originally a ground floor hall approx
6x4m, with projecting winder stair to rear left leading to
upper hall of the same size, both with fireplace in the front
wall. Each property had a rear door through a squinch opening
to a small enclosed yard, and possibly a latrine under the
staircase. All subject to extension and alteration from mid
C15, when some of the C14 units knocked together to make
single dwellings. Few plans remain unchanged, and there have
been various combinations and extensions; No.14 has a return
wing facing S down the Close, and attached to the Vicars'
Chapel (qv), and No.16 was almost entirely rebuilt in the C18.
Some interiors and layouts are described below.
EXTERIOR: 2 storeys, some attics, variously 2 to 6 bays, many
12-pane sashes, but No.18 has canted sash bays through 2
storeys, and Nos 22, 26, 27 and 28 have restored stone
mullioned casements. Doors are generally 4 or 6-panel, mostly
with transom-lights, but Nos 22 and 27 have plank doors on
straps. There are various remains of flush surrounds to former
door and window openings, and a moulded stone eaves course is
interrupted by the external stacks, 21 in all, with square
lower sections carrying octagonal shafts with an open fretted
capping (but the 2 stacks to No.16 are without cappings). Each
stack has 2 square stone panels with heraldic shields.

INTERIORS: the following were inspected:
No.14: includes a return range to the right, facing S down the
Close. A reference in 1790 gives it as being the house of 'the
Senior Priest Vicar'.
It is in 1 bay with a C15 4-light stone-mullioned casement to
each floor, separated by a panelled apron with heraldic
shields; the lights include Art Nouveau leaded glazing to the
cusped heads. In the gable above is a small blocked vent.
The property has a more complex plan than the other houses,
with a small yard enclosed on the N side by 2 wings, gabled to
The Liberty, and joined by a wall. There are various windows
in these wings including C15 or C16 stone casements.
Entrance is to the far left, with a square well staircase
between front and rear ranges, and the principal room to the
right connects to the S-facing range.
The passage has a wide blocked opening, right, to the yard;
the upper floor is similar, with the main bedroom connected to
the upper room in the return range.
At the ground floor the passage wall is exposed rubble. The
room to the right has a large but damaged fireplace, the upper
pinnacle or ogee broken, above a very flat arch, and flanked
by sashes in embrasures. The 6-compartment ceiling has moulded
beams. The adjoining space has a square fireplace with moulded
surround, but interrupted across the lintel, and a
4-compartment ceiling similar to that adjoining.
The kitchen to the rear has a wide C17 plank door and 2
stopped-chamfer beams; the window to the courtyard has a
4-centred head, and eccentric timber fill.
The passage by the staircase has a very wide 4-centred opening
to a broad chamfer, and to the right are remains of a spiral
stair, and a 2-light casement with chamfered mullion. Under
the stair is a wide-plank C17 door. The bottom tread of the
staircase, in stone, has an incised grid pattern, continued to
the nosing.
The staircase, probably C18, has turned balusters and solid
rail. The first floor main room has 2 beams, and a cut-down
C15 fireplace, painted, with triple colonnettes on high bases,
but cut back at approx 1.5m to a plain mantel shelf; low left
is a salt cupboard with 4-centred head to a stone surround,
and door with butterfly hinges.
From here the opening to the second room has a 4-centred
moulded arch with a painted scroll ('Honi Soit..'?) with a
green dragon to the left, and a headless angel to the right.
The study has a lowered, flat ceiling, a large painted stone
moulded eaves course in the W wall (the original outer wall
?), and a 4-light narrow casement with mortices for
stanchions, the chamfered mullions replaced. In the N wall is
a small stone fireplace with a very deep flat lintel, and a
deep moulded wall beam.
The main room to the rear through a wide plank C18 door, has a
chamfered beam, cusped light to the E, and to the N a
chamfered rere-arch over a blocked opening.
Above the stair, near the W wall, is a chamfered beam, and
there is a splat-balustered vent to a cupboard side. There are
various 4 and 6-panel C18 doors. The roof only partly
accessible, but one slope has 2 purlins and one range of
chamfered wind-bracing.

No.15: a 5-bay front, combining 2 original properties. Partly
inspected. Left-hand ground-floor room is panelled, with tall
panels in ovolo-mould above a dado rail, and with dentil
cornice.
The stair is approached through a round arch. Reputed to have
an early cellar. There is a large C15 wing in rubble and
roughcast, with hipped pantile roof.

No.16: this is a wide 5-bay property, incorporating two
original properties, but appears to have been almost
completely rebuilt in the late C18.
It is a symmetrical double-depth plan with central dog-leg
staircase with stick balusters and open string. Doors are with
fielded panels. Cellars remain.

No.17: a 6-bay front, incorporating 2 original properties, and
retaining 2-light casement with cusped ogee-headed lights, and
an ogee-headed 'piscina', a wide fireplace to crude 4-centred
head, and a 2-door 'screens' incorporating a plank door on
straps with a blocked central opening.
The central passage is stone flagged, leading to closed string
stick baluster staircase. At first floor the room to the right
has a fire surround to 4-centred arch, with mouldings stopped
to high octagonal plinths, and the window embrasure has a
rere-arch with hollow mould. This floor has some moulded
beams. One section of roof is arch-braced, with 1 purlin, to a
brattished plate, and another has arch-braces to a heavy
collar, with 2 chamfered and stopped purlins, plus an upper
range of wind-bracing.
A rear wing, left, has a large rubble stack. This is one of
the best of the retained interiors.

No.21: a small single unit, much modified, but retains main
roof structure with wind-bracing in the front slope in an
attic.

No.22: has restored original stone-mullioned window forms. The
whole interior restored c1990, has a large single room at each
level, with a passage to rear wing, a C20 staircase and
remnants of an earlier stair.
The ground-floor room with re-set stone paving has a very
large chamfered lateral beam, and in the ceiling to the right
2 bays of C19 painted decoration. The fireplace in the front
wall has a 4-centred arch, and the rear wall retains the
2-light stone casement.
In the passage to the rear is a shouldered arch to the former
newel staircase.
The first floor hall has the original 3-bay roof structure
with arch-bracing, 1 row of wind-bracing to 2 purlins, and a
brattished plate, to both slopes.
To the front is a small square fireplace with chamfered
surround, and in the rear wall is a single casement with stone
transom, to a shouldered rere-arch.
In the passageway is a small light with early rectilinear
leading. One roof truss is said to have a painted tympanum,
not seen. The recent restoration presents the house in a
near-original layout.

No.24: a small unit with wing, all much modified, but with
fragments of several periods. In the entrance lobby is a large
rough lateral beam with deep chamfer, continued boxed into the
main ground-floor room, which has a deep recess to segmental
head, and a mid C20 tiled fire surround.
The painted stair has a stick balustrade, turned newel and
solid string.
The main first-floor room is entered through a C17 two-panel
door with mouldings, and there are various C17 and C18 doors.
The rear wing has steel casements.
The roof has been restructured, but has one arch-braced truss.

No.25: a single unit, with side passage to a winder stair, and
a rear wing. The ground floor front, with early C18 square
panel door on H hinges has C17 painted panelling throughout,
including in the wall to the passage side some horizontal
'frieze' panels with scroll decoration; in the N wall is the
profile of a large chamfered beam. C19 fireplace.
The rear wall has a splayed recess to the former doorway, and
a deep-set 8-pane light with grisaille glazing incorporating
some silver-stain work, and to the right is a niche cupboard.
At the foot of the stair is a rough stone segmental arch,
possible inserted in the C20.
Under the staircase is a C17 plank door with mouldings, and
another 3-plank door to the kitchen.
The stair has stick balustrade and turned newels, and divides
at the upper landing.
First floor has 2 small front rooms; that to the N has a
transverse C16 beam and a blocked fireplace, and to the S a
similar beam, 6-panel C18 door with square middle panels, and
C17 dado panelling.
The partition at the rear of the bedrooms includes 2-panel
doors under transom-lights.
The roof only partly accessible includes considerable
replacement rafters, and has at least one wind-brace.

No.26: partly inspected. The ground floor left room has a
4-compartment ceiling, and right room has a fireplace with
4-centred arch; first floor left has C19 fire surround, and
beam with run-out stops.

HISTORICAL NOTE: this is the W half of a double row of houses
(qv Nos 1 to 13) enclosing a street, nearly 140m long, which
slopes down gently from the N, and is narrower at the upper
than the lower end.
Rodwell (in Colchester, op cit) has shown that the stacks are
part of the original C14 layout, and that the roof structure,
much of which still remains, was of one date; the continuous
eaves-line, interrupted by the projecting stacks, follows the
slope of the street, and there is a raised coping to each of
the original party walls.
The houses were provided for the Vicars Choral, and many still
serve this purpose, although from 1840 until c1970 the Wells
Theological College occupied the properties.
This is an outstanding early planned street, closed at the N
end by the Vicars' Chapel (qv) and the S by the Vicars' Hall
(qv), in which the overall form of the buildings remains
substantially unchanged.
(Colchester LS: Wells Cathedral: a History: Shepton Mallet:
1982-: 212-226; The Buildings of England: Pevsner N: North
Somerset and Bristol: London: 1958-: 319; Pugin AWN: The
History and Antiquities of The Vicars' Close, Wells: London:
1836-).