The Music School and Attached Walls 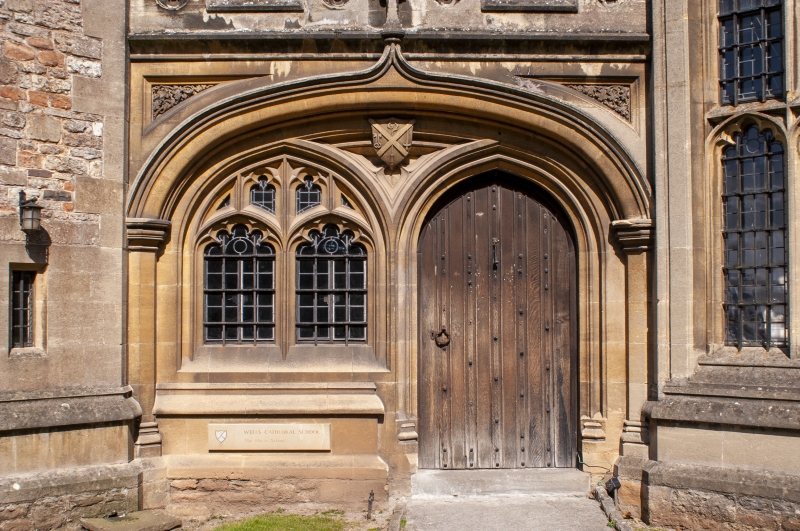 Former house of the Archdeacon of Wells, now music school.
Largely rebuilt by Archdeacon Holes c1450-70, possibly
retaining some C13 work, extensively restored 1886 by Edmund
Buckle. Local stone roughly squared and coursed, with ashlar
chimney stacks, slate roof.
PLAN: a large full-height hall, cross passage to the left, and
rooms on 2 floors and attic left, with staircase turret front,
left.
EXTERIOR: front elevation of 6 bays. Plinth, parapet string
and battlemented parapet, corner turrets with conical roofs
and crocketed finials. Perpendicular-traceried windows with
cinquefoil cusping; bay 1 has 3-light windows to two levels,
the lower having a segmental relieving arch over, the upper
has a transom and a flat label mould; bay 2 an octagonal plan
projection with hipped roof, with small windows at lower
level; bay 3 is a projecting porch almost as far as bay 2,
with large elliptical C19 arch framing a 2-light window and a
pointed arched doorway, ornamented battlemented parapet, above
which is a 3-light transomd window with flat label, and in
roof a C19 dormer with pitched roof; bay 4 has a projecting
solar window with chamfered corners, not to full height, with
pair of 2-light transomd windows with arched heads on south
face, and single 2-light windows to SW, SE and east faces
under battlemented parapet; bays 5 and 6 have later 2-light
windows with transoms and a different tracery pattern, with
relieving arches and no labels. In the south-east corner are
jamb and part of the arch of an earlier door.
West gable has three 4-centred blocked arches at low level, an
offset at eaves level, and in the gable a circular window
divided into 5 parts by C19 tracery, with a trefoil cusped
window above.
The north elevation modified by a lean-to house at rear, but
has 2-light arched traceried window to east bay and deeper
transomd windows for the next two bays.
INTERIOR: the main entrance cross-passage has 2 transverse
beams with chamfers to run-out stops. To the right the hall,
entered through a pair of fielded-panel doors, has an 8-bay
arch-braced collar roof with chamfered purlins and 4 ranges of
broad chamfered wind-braces, in X-form, to a diagonal ridge,
with flat rafters, boarded, on a brattished plate over open
cusped lights and a further brattished lower member, with a
deep carved inscribed frieze. Near the east end on north side
a cusped recess apparently of C13 date. At the E end is a
plain wall with oculus, and a gallery on scrolled brackets,
returned to the N side, with a series of thin turned balusters
to arches in groups of 5, and a deep handrail. At the W end is
a gallery with a free-standing spiral stair and similar
balustrade. At the ground floor level is a C19 stone fireplace
with frieze and mantelshelf, on octagonal pilasters. The
frieze inscription reads: 'Omnis Scriba doctus in regno
coelorum similis est homini patrifamilias qui profert de
thesauro suo nova et veta .... Sacerdotis custodient licentiam
et legem requirent ex die eius quia angelus Domini exercitum
est MDCCCXL'. This may replace the 'monkish verses' said to
have been here in 1680. The rooms at the far side of the
cross-passage are mainly in late C19 detail, but the attic
storey still retains heavy principals and purlins of earlier
date.
SUBSIDIARY FEATURES: attached to the SW corner a short length
of tall wall with coping and gateway to the west, having plain
square ashlar piers with simple plinth and pyramid caps, with
C20 timber gates, then enclosing front area, with quadrant
curve on SW corner, a wall approximately 1m high with pitched
roll-top ashlar coping, with gap opposite porch, continued to
a matching gateway at the east end against the Vicars' Hall
(qv), with a tall return all northwards back to the SE corner
of the building, adding to the setting of this building and to
the street scene of the Cathedral Green.
HISTORICAL NOTE: the building remained a house when Polydore
Vergil, author of "Historia Anglia" was forced to surrender it
to the Crown in 1555. In the late C18 it became a brewery, but
after the 1886 restoration it served for 90 years as the
Library to the now defunct Wells Theological College, and in
1955 came to the Cathedral School.
(Buildings of England: Pevsner N: North Somerset and Bristol:
London: 1958-: 319; Bailey S: Canonical Houses of Wells:
Gloucester: 1982-: 123).