A Grade I Listed Building in Rushbury, Shropshire 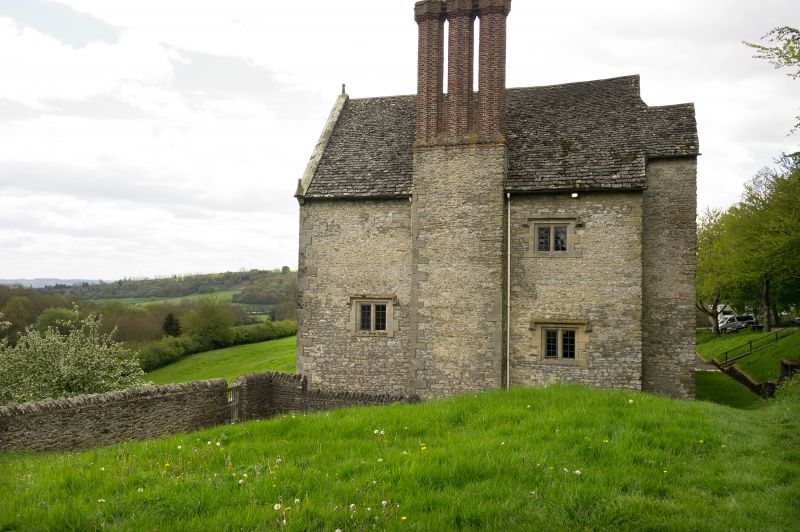 Manor house, now owned by National trust and used as Youth
Hostel. Late C16, restored 1936. For Francis Smallman.
MATERIALS: stone rubble with ashlar dressings to window
surrounds throughout and quoins, hoodmoulds, mullion and
transom windows, entrance porch surround, plinth cap, copings
and finials on the front only. Rectangular leaded lights
throughout. Old stone-slate roofs with ashlar coped gables
with finials to front, plain gables and conical turret roof to
rear. Wide partly projecting stone eaves stacks at each side
and rear surmounted with 3 spurred diagonal shafts with
connecting oversailing caps, the south-west side with 5 shafts
on a base of diapered brickwork.
PLAN: approximate H-shaped plan with gabled extension within
the arms on each side.
EXTERIOR: 2-storey and attic. South-east front with 4 gables,
the 3 to the right projecting, with single window in each
storey in each block, with stone mullions and transoms and
hoodmoulds. Much of the original glazing remains, as well as
the iron stanchions. The gable-head windows and 2 left-hand
gable upper and single left-hand lower windows have 3 lights,
the remaining upper-floor windows have 4 lights, ground-floor
centre-right gable (great hall) window has 6 lights and
additional 3-light returns, the far right gable window has 5
lights with 3-light return and simple mullion window on the
inner return wall. Porch is in the left projecting gable and
has a moulded shallow 3-centred opening to a recessed oak
nail-studded door.
South-west side: central projecting stack with single small
window set in the stack to the left. North-east side: central
projecting stack with single mullion window to left at ground
storey and to both storeys to right.
Rear: gables at each end, that to the right projecting and
with mullion window at each storey and single-light windows on
the return wall, that to the left partly covered by both a
small full-height gabled garderobe outshut and a large
semicircular stair turret. Both turret and main gable with
single light windows over mullion windows. Central projecting
stack in linking wall with ground-storey mullion window to
left and upper-floor mullion window to right over cambered
doorway.
INTERIOR: most walls have exposed square-panelled framing,
ovolo-moulded door surrounds, and decorative plastered
ceilings. Hall with cartouches in ceiling with `FS' and `1601'
and `IESV.' and large Tudor-arched fireplace with carved
surround, 4-centred north doorway. Parlour to north bay has
more elaborate ceiling of star-shaped ribs and motifs and is
dated 1601 and `IESV'; chamfered 4-centred fireplace with cast
fire-back dated 1669, early 2-panelled door with raised
moulding.
Upper-floor rooms contain fireplaces with 4-centred
mantelbeams with chamfered surrounds, chamfered bridging beams
with ogee stops. One small room is panelled, dated 1672. Stair
turret with conical roof with 4-centred chamfered beam and
winder staircase of solid oak blocks round a tall central
newel post reaching through both storeys.
South cross wing has a 4-bay twin trenched-purlin roof with
chamfered purlins and trusses with collar and no tie beam.
Main range has a 4-bay twin trenched-purlin roof (single to
north) with 5 collar trusses.
North cross wing has a 4-bay twin purlin roof.