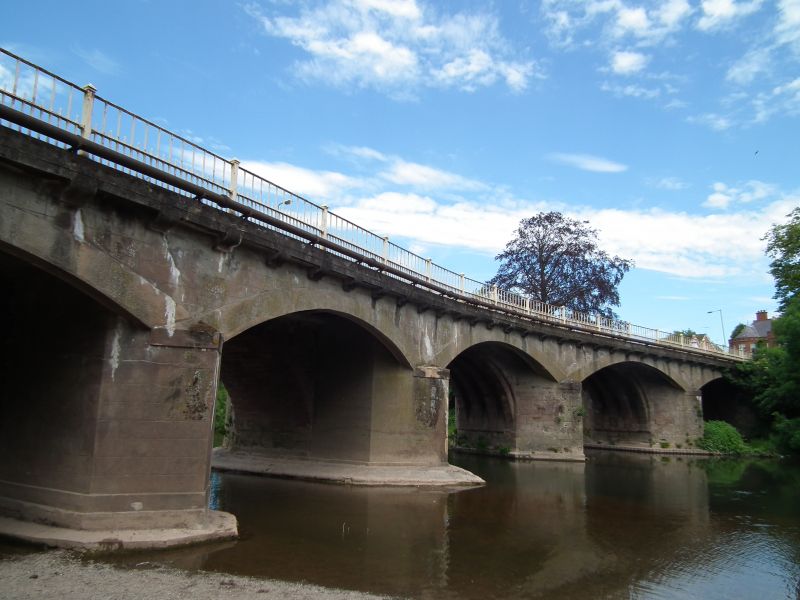 MATERIALS & PLAN: Ashlar with reinforced concrete widening and iron balustrade. The bridge has six spans and is angled towards the current at its middle.

To the north are three, C14 ashlar, ribbed, round arches with integral cutwaters to both sides (with three plain ashlar arches on south side which have integral cutwaters on the west side and a concrete pier and cutwater on the east side). There are reinforced concrete segmental-arched lining on both sides of the arches springing from the cutwaters, with that on the east side extended to form the road widening. There is a corbelled concrete balustrade beam on both sides. Early C20 cast-iron railings terminate at ashlar piers with pyramid caps with the north-east pier retaining a fluted cast-iron lamp standard. There is a cast-iron shield set on the parapet railing with an inscription reading THIS BRIDGE WAS REBUILT AND WIDENED BY COUNTY COUNCILS OF WORCESTERSHIRE AND SHROPSHIRE 1908.

The bridge probably has a C14 stone core which is believed to have replaced an earlier timber structure. It appears not to have been damaged during the Civil War. The south side was rebuilt around 1770, following flood damage, which is believed to have destroyed the three southern arches. The bridge was widened by Telford in 1815 and he was probably responsible for altering the direction of the southern spans which present an angle to the current and mean that the bridge bends in the middle. It was widened again in 1868 and finally in 1908 by the Worcestershire County Surveyor, JH Garrett. The bridge is traditionally considered to be a Hundred Bridge which dwellers in the area were responsible for re-building or breaking down to stop Welsh raids.

Teme Bridge, a road bridge of six arches with portions from the C14, C18, C19 and early C20, is listed at Grade II for the following principal reasons:
* Historic interest: it is a significant example of a medieval bridge which illustrates medieval bridge building techniques;
* Degree of survival: although it has been repaired since it was built its continued use and adaptation in the C18, C19 and C20 is an on-going testament to medieval road building in England.