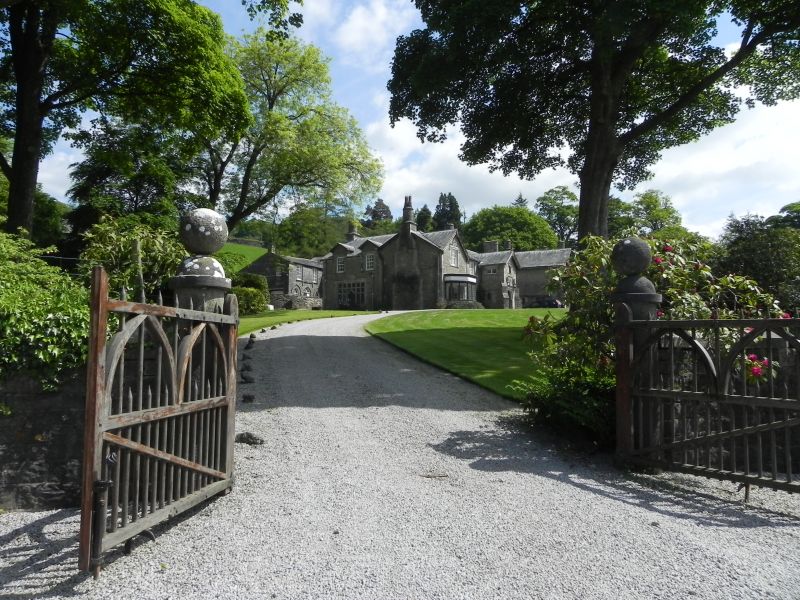 Large house. Early C18, remodelled and greatly enlarged in 2
phases, first in 1825 second in 1888 by Robert Burra Random;
altered. Coursed sandstone rubble with freestone dressings and
green slate roofs. Complicated and irregular plan on east-west
axis facing south, comprised of a hall range with a projected
porch, a receding wing to the left (coupled with another at
the rear), a prominent gabled wing to the right (which appears
to incorporate the earliest surviving fabric), and an eastward
extension to that with a matching gabled wing to the right.
Mostly Gothick style.
EXTERIOR: 2 storeys throughout. The hall range has a gabled
2-storey porch (probably 1888) with diagonal buttresses, a
Tudor-arched doorway with a large carved plaque above it, a
small round-headed window at 1st floor and elaborately
traceried bargeboards; and early C19 windows on both floors,
mostly 2-light sashes and all with Gothick glazing bars and
hoodmoulds. The gable to the left, in similar style, has a
large added polygonal bay window at ground floor, with
geometric leaded glazing. The re-entrant side of the wing to
the right (which has old render) has a pair of original small
2-light windows with chamfered mullions at ground floor under
a continuous hoodmould; the gable of this and the east wing
both have battered canted bays with mullion-and-transom
windows at 1st floor. The range between them has a garage at
ground floor and a 2-light sash above. Various square chimneys
with cylindrical shafts. Attached to the south-east corner is
a flight of steps to a balustraded terrace. The west side of
the receding west wing has an exceptionally large rectangular
window with mullions and transoms and an arched light in the
centre; and gabled half-dormers with Gothick sashes like those
at the front. The rear has mostly unhorned sashes with glazing
bars.
INTERIOR: neo-Gothick hall and staircase, panelled dining
room, 1st-floor drawing room and landing with early Gothick
panelling and Renaissance-style fireplace.
Forms group with sundial in forecourt (qv) and with gateway to
south-east corner of garden (qv).