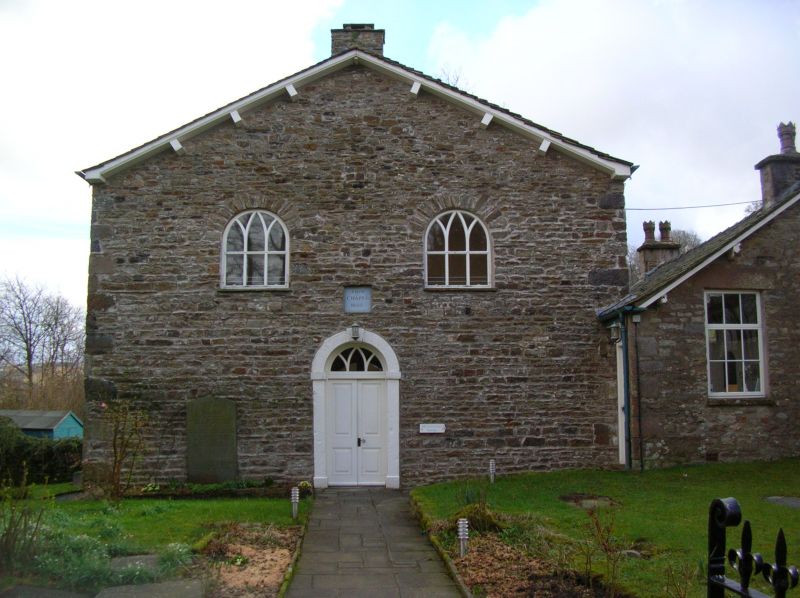 Congregational chapel, now United Reformed church. Dated 1835
over doorway; altered. Roughly coursed sandstone rubble with
quoins, stone slate roof. Rectangular plan on roughly
east-west axis. Single vessel.
EXTERIOR: the gabled west front, which is symmetrical, has a
round-headed doorway in the centre, with a plain surround
including simple imposts and a keystone, a 4-panelled door and
fanlight with Gothick glazing bars; a square datestone above
the doorway, inscribed "ZION / CHAPEL / 1835"; and slightly
above this a pair of short round-headed blind windows with
rubble voussoirs and painted Gothick glazing bars. Roof of
shallow pitch, with projecting purlins (probably rebuilt in
later C19 or early C20); short gable chimney. (Overlapping the
front right-hand corner is a low single-storey church room
which is not of special interest.) The rear gable and both
side walls all have 2 large round-headed windows with rubble
voussoirs and Gothick glazing bars; and the north side and the
rear each have added buttresses, strongly battered.
INTERIOR: pitch-pine fittings and furnishings including
internal porch, dado, benches and raised minister's desk.
Forms group with associated Congregational Manse to south-west
(qv).