A Grade I Listed Building in Dent, Cumbria 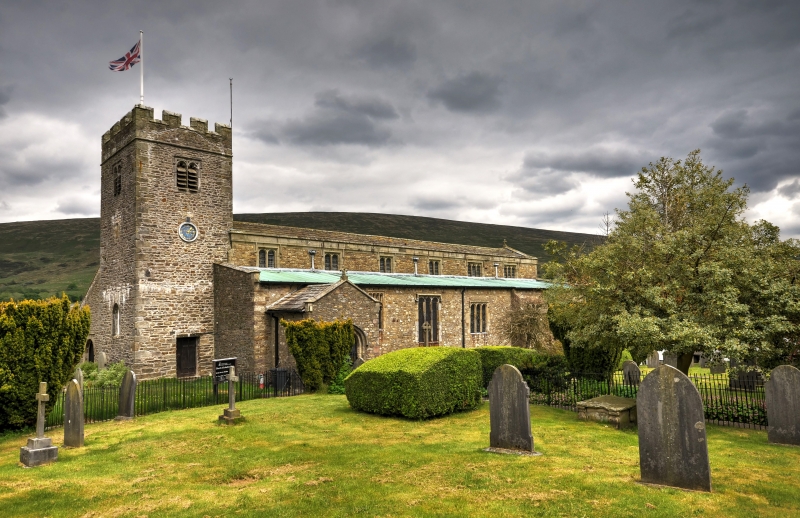 Parish church. Probably C12, enlarged and remodelled in early
C16, with some fabric believed to be Norman; tower said to
have been added in later C18; much renewed in 1889. Mixed
random rubble with quoins; stone slate roof to nave, copper
roofs to aisles. Mostly simple Perpendicular style.
PLAN: nave and chancel in one, with full-length north and
south aisles, south porch and west tower.
EXTERIOR: the square unbuttressed tower, with an embattled
parapet, has a square-headed doorway in the south side, a
small window in the west side and small 2-light belfry windows
with cusped lights and stone louvres. A lean-to in its north
angle (continued form the north aisle) has a round-headed
doorway with a stone slate drip-band over it. The nave has 4
clerestory windows of 2 round-headed lights and the chancel
continues with two 3-light clerestory windows which have
cusped lights, all these windows with hoodmoulds. The south
aisle has a gabled porch at the west end with a round-headed
doorway moulded in 2 orders and a C19 2-centred arched inner
doorway; and 5 tall square-headed mullioned windows of various
sizes (a buttress between the 3rd and 4th windows), all with
round-headed lights: a 2-light window next to the porch, with
Perpendicular tracery in the head, a tall 3-light window and a
shorter 3-light window, all variously restored, then 2
original C16 3-light windows. All these windows have
hoodmoulds with dropped ends and the second one has mask
stops. Below the 4th window is a small round-headed priest
door. The north aisle has a blocked round-headed doorway to
the 1st bay, with a chamfered surround, a square 2-light
mullioned window above and to the left, and then four tall
3-light windows with hoodmoulds, like those of the south
aisle.
The east end has a large segmental-headed 5-light east window
with a transom flanked by 3-light windows, all these windows
restored.
INTERIOR: 3+3 bay nave and chancel arcades of 2-centred
double-chamfered arches, the former (probably early C13) with
2 cylindrical columns between octagonal terminal piers which
appear to have been designed for different arcading (and those
at the west end partly enclosed by the masonry of the tower,
which has no opening), and the latter (probably C16) with
octagonal columns. The 2 eastern bays have balustraded screens
to the choir (probably C19); the choir and chancel are paved
on 2 levels with polished Dent marble in black and white
chequer pattern. Octagonal oak pedestal pulpit with lozenges
in the side panels, bracketed desk with carved frieze
including raised lettering "M T 1614", and a sounding-board.
The south aisle contains 5 original C17 box pews with carved
decoration, some with initials and dates, and early C18
benches with fielded panel backs and initials worked in metal
studs; and the north aisle has early C18 enclosed side-benches
in 2 tiers, with a late C17 box pew at each end. Wall
monuments: in the south aisle, 2 early C18 pedimented
sandstone aedicules with fluted pilasters and dentilled
entablatures (now laminating and the tablets illegible), a
marble wall tablet commemorating Adam Sedgwick (1785-1873,
Woodwardian Professor of Geology, Cambridge University) and
another commemorating his son (vicar of Dent); in the north
aisle, a pair of marble wall tablets to members of the Sill
family of West House (now known as Whernside Manor, qv),
including John Sill "of Providence in the Island of Jamaica",
d.1774, and another to Emma, widow of General Brownrigg
(d.1815 at Broadfield House, qv).