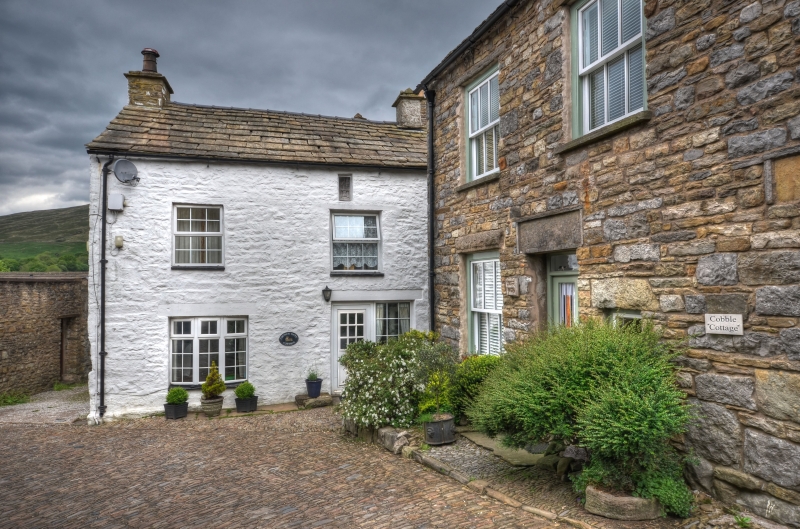 Pair of cottages. Late C17 or early C18, remodelled in mid to
later C19; altered. Roughly coursed sandstone rubble with
quoins, rear white-washed, stone slate roof. Single-depth
2-unit plan on north-south axis facing west and backing onto
churchyard.
EXTERIOR: 2 storeys, 2:1 windows. West View to the left has a
C19 square-headed doorway with part-glazed door and large
rectangular lintel with a simple hoodmould, a very small
square window to the right with stone surround, a large 6-pane
window to the left and 2 other large 6-pane windows at 1st
floor, all these now top-hung casements imitating sashes.
Cobble Cottage to the right has a similar doorway but with old
quoining to its left jamb, a large 6-pane sash to the right
and another above and between these openings. Gable chimneys,
that to the right square and set just inside the gable wall.
The rear wall, which is of 3-storey proportions, has 4 small
windows on each main floor, all with 4-pane glazing and mostly
square except those in the centre of the ground floor which
are oblong and have narrow side lights; and a small blocked
1-light window to the right at 2nd-floor level.
INTERIOR not inspected. Part of a significant and prominent
town centre group with Church of St Andrew to the rear (qv),
and with the Sun Hotel (qv) opposite.