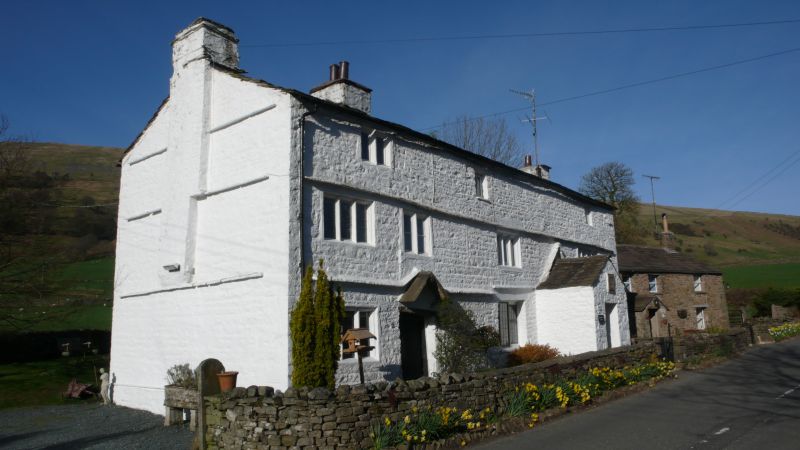 Farmhouse with attached cottage, now all one house. Probably
late C17, enlarged in early C18 (dated 1712 on porch and on
internal spice cupboard); raised and altered. White-washed
roughly-coursed rubble with quoins, stone slate roof. T-plan
formed by single-depth main range of 1:2 units on an east-west
axis facing south, with a rear outshut to the centre of the
2-unit portion.
EXTERIOR: 3 storeys (raised from 2), 2:2 windows, with stone
slate drip-courses over the ground- and 1st-floors. The 2-unit
portion has a gabled porch in the centre (under pitched
water-tabling of a formerly more steeply pitched roof) with a
square datestone which has raised lettering "H / I I / 1712"
(= John and Isabell Haygarth), and a square-headed inner
doorway with a studded oak door; an altered and enlarged
window to the left and remains of a fire-window left of that,
and a 4-light double-chamfered stone mullion window to the
right. The 1st floor has a restored or C20 3-light window to
the left, remains of a former 2-light window left of that, and
a 4-light window to the right like that at ground floor; and
at 2nd floor 2 widely separated small square blocked windows.
The 1-unit portion to the left has a pitched stone slate
canopy over a doorway which has a sloped lintel and an old
studded oak door, an altered 3-light window to the left; a
2-light window above the porch and an altered or restored
3-light window left of that; and a blocked 2-light window to
the 2nd floor. Chimney at left gable corbelled from 1st floor,
square ridge chimney at junction, gable chimney to right. Left
gable wall has 3 courses of through-stones. Rear: small
fire-windows in line with ridge chimney at ground- and 1st
floor; full-height outshut under catslide roof, with (inter
alia) two 2-light mullioned windows in the side wall.
INTERIOR: 1-unit portion to left has large lateral beam;
2-unit portion has inserted full-height stone partition wall
immediately left of doorway, original muntin-and-rail panelled
partition to parlour on right; parlour has 2 axial beams,
internal chimney over large rectangular stone fireplace with
corbelled lintel and chamfered surround, and spice cupboard to
right with butterfly hinges and raised lettering matching that
on porch; chamber over parlour has chamfered lateral beam with
2 sets of chamfered secondary beams, and built-in spice
cupboard with butterfly hinges and carved panel with raised
lettering "IHIH / 1712" (= John and Isabell Haygarth); roof
has 2 principal rafter trusses, one with stone partition wall
immediately west of it.
HISTORICAL NOTE: home of John Haygarth (1677-1757) and his
wife Isabell.
Forms group with barn approx. 30m north-east (qv).