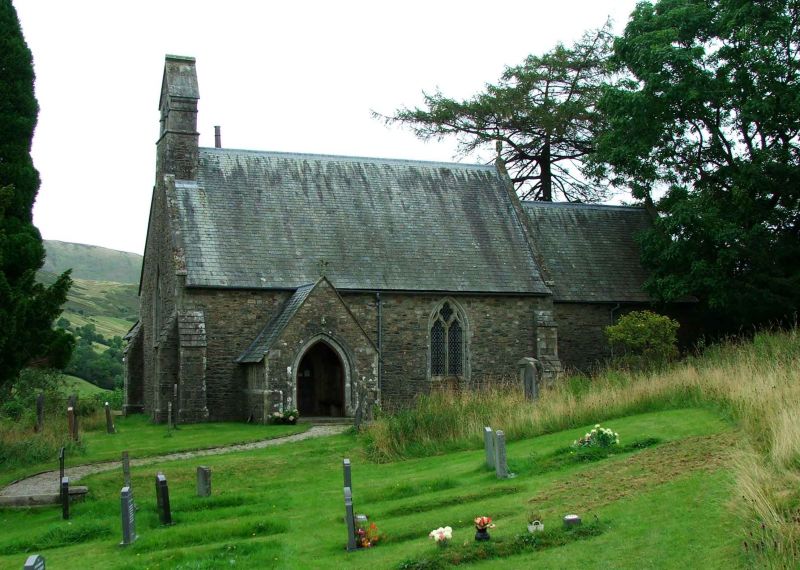 Church. 1847, by William Butterfield. Mixed random rubble with
freestone dressings, graduated green slate roof. Simple
Decorated style.
PLAN: nave with west bellcote, south porch, chancel and north
vestry.
EXTERIOR: the west end of the nave has short but sturdy angle
buttresses with weathered offsets, a 2-centred arched 2-light
west window with double-chamfered surround, with cusped lights
and a quatrefoil in the head, steeply-pitched gable coping
broken in the centre by a gabled bellcote with a weathered
band and a pair of cusped openings. Its south side has a
prominent gabled porch, its roof-ridge at eaves level of the
nave, with a chamfered plinth, a large 2-centred arched
doorway moulded in 2 orders and a heavy board door, gable
coping with an apex cross, and a pair of small cusped windows
in each side wall; and to the right of the porch a window like
that at the west end. The chancel, only slightly lower than
the nave, has one smaller but similar window in each side, and
a large 3-light east window with moulded surround,
ogival-headed lights, geometrical tracery and a hoodmould.
INTERIOR: plain panelled dado and plastered walls;
scissor-braced common-rafter roof with ashlar-pieces and
collars to every pair (i.e. a wagon roof); double-chamfered
chancel arch with simple Perpendicular-style wooden screen,
flanked by painted Biblical texts; chancel with panelled
reredos and arch-braced common-rafter roof.
A simple but boldly-modelled design, in which the main
features are executed with conviction (e.g. the buttresses,
porch and roof structure).