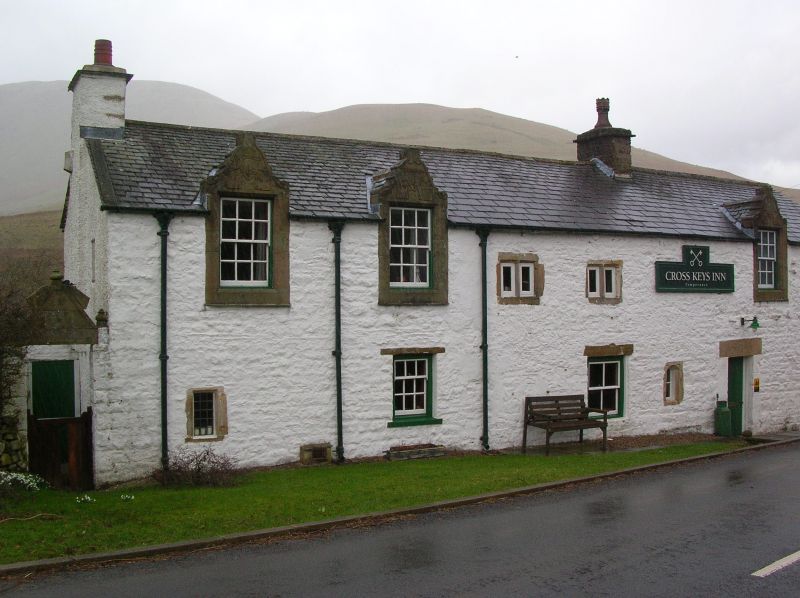 Farmhouse or inn, now hotel. Dated 1732 on lintel of doorway
but probably earlier than this; altered in C19 and early C20,
with extension added to rear. Whitewashed rubble with quoins,
graduated slate roof. Single-depth 2-bay plan on north-south
axis with added shippon at north end subsequently integrated
with house and entrance into this forming a "hearth-passage
plan", with rear outshut to centre and added outshut to
northern bay embracing this; parlour at south end extended in
early C20.
EXTERIOR: 2 low storeys with 5 irregularly-disposed windows.
The doorway to the 3rd bay (abutting the junction with the
centre bay) has a monolith lintel with raised lettering "17/ H
/ A / 32". The centre bay has a blocked 2-light mullioned
window to the left, a 4-pane hornless sashed window, and a
round-headed 1-light fire-window to the right with hollow
spandrels; and, at 1st floor two small formerly 2-light
mullioned windows now lacking the mullions. The 1st (south)
bay has a small chamfered 1-light window to the left and a
9-pane sash to the right at ground floor, and a pair of large
late C19 or early C20 half-dormers in Jacobean style furnished
with 12-pane sashes. The 3rd (north) bay has a matching
half-dormer, and an iron inn sign bracket. Ridge chimney at
junction of 2nd and 3rd bays, square extruded chimney at left
gable corbelled from 1st floor. Right-hand gable wall has
(inter alia) a 2-light mullioned window at 1st floor with a
chamfered flush-mullion; extended outshut continues to rear.
Rear: sun lounge added to 1st bay.
INTERIOR: remodelled in early C20 by insertion of partition
wall at lower end of former housepart and southward extension
of parlour, leaving 2 chamfered lateral beams in centre bay
(that to north formerly a firehood bressumer) and a 3rd to
south of partition wall with mortices of former panelled
partition to formerly smaller parlour; spiral stone staircase
off rear of centre bay; at 1st floor, a muntin-and-plank
partition (over the beam now in the extended parlour), with
scratch-moulded muntins.
Forms group with barn approx. 25m north (qv).