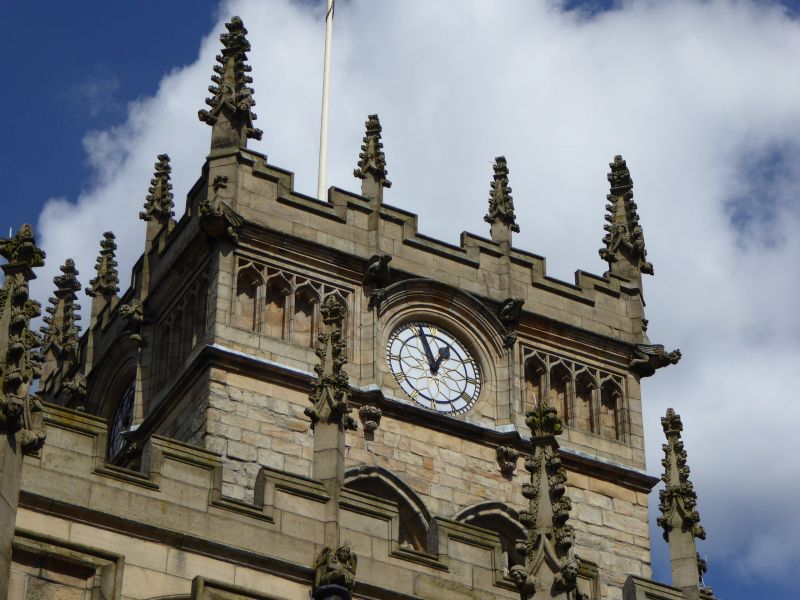 Formerly known as: Church of All Saints MARKET PLACE.
Parish church. Mainly C15; but, except for the north tower and
chapel, restored 1845-50 by Sharpe and Paley to the point of
substantial rebuilding as a faithful copy; tower, top stage by
Paley in 1861, restored and partly re-faced in 1922. Tower and
chapel mostly of coursed squared sandstone; otherwise,
sandstone ashlar, lead-clad roof. Perpendicular style.
PLAN: 6-bay nave and 2-bay chancel as one vessel, with
continuous south aisle, south porch at west end of this, north
aisle with tower attached at junction with chancel and chapel
to west of this, north vestry to chancel.
EXTERIOR: the nave and chancel, separated by octagonal turrets
with crocketed caps, have tall 4-centred arched clerestory
windows coupled in each bay so as to form an almost continuous
arcade, all the windows of 3 lights (except a 2-light window
at the west end) with deep splayed reveals and linked
hood-moulds, those of the nave with cusped lights and hollow
spandrels and those of the chancel with Perpendicular tracery
over similar lights. The south aisle is buttressed, with one
large 4-centred arched window in each bay, those to the nave
of 3 cusped lights with mouchette tracery and those to the
chancel of 4 cusped lights with differing tracery in the heads
(quatrefoil in the 1st, Perpendicular in the 2nd). Both nave
and aisle have moulded bands and embattled parapets with
slender crocketed pinnacles, those of the nave rising from
angel corbels on the band and those of the aisle from carved
grotesques. Prominent gabled porch to 2nd bay of nave aisle,
in matching style, with moulded 2-centred arched doorway;
priest doorway to 2nd bay of chancel aisle. At the west end
the nave has a large 6-light traceried window with brattished
transom, over a band of enriched quatrefoils; at the east end,
the chancel has a large 7-light window with a transom, cusped
lights below and Perpendicular tracery above. The north aisle
has 3 bays, a square-headed doorway in the centre and large
7-light windows with Perpendicular tracery in the others.
The tower, square and of 4 unequal stages, with diagonal
buttresses, has small 2-centred arched windows to the 2nd
stage with Y-tracery; large coupled 3-light belfry windows
with stone louvres and Perpendicular tracery, and a short
blind-arcaded top stage with a clock face in the centre of
each side, a moulded cornice with prominent corner gargoyles,
and an embattled parapet with crocketed corner pinnacles and a
pair of smaller ones in each side.
The 2-bay chapel has large depressed arched windows of 5
stepped lights with cavetto mullions and hollow spandrels: 2
in the north side and one in the west gable, the latter with a
C19 doorway breaking into its left corner.
INTERIOR: 6-bay aisle arcades of quatrefoil columns with
moulded 2-centred arches, shafts between the bays rising to
clerestory and surmounted by consoles with statues of angels;
at west end, tiered Corporation stalls of 1850;
Perpendicular-style coffered roof with moulded beams and
joists (said to be largely old timbers); chancel arch with
good painted and carved screen and next to this a pulpit in
matching style; chancel with Minton tiling; south chapel
containing damaged stone effigies (believed to represent Sir
William de Bradshaigh and wife Mab); north chapel with various
Walmesley wall monuments; in south aisle wall monuments to
Roger Downes of Wardley (1676), John Baldwin (d.1726) a small
elaborately carved cartouche, William Bankes of Winstanley
(1689) a draped cartouche with skull, and a stained glass
window of St Christopher by William Morris 1868.