A Grade I Listed Building in Tiverton, Devon 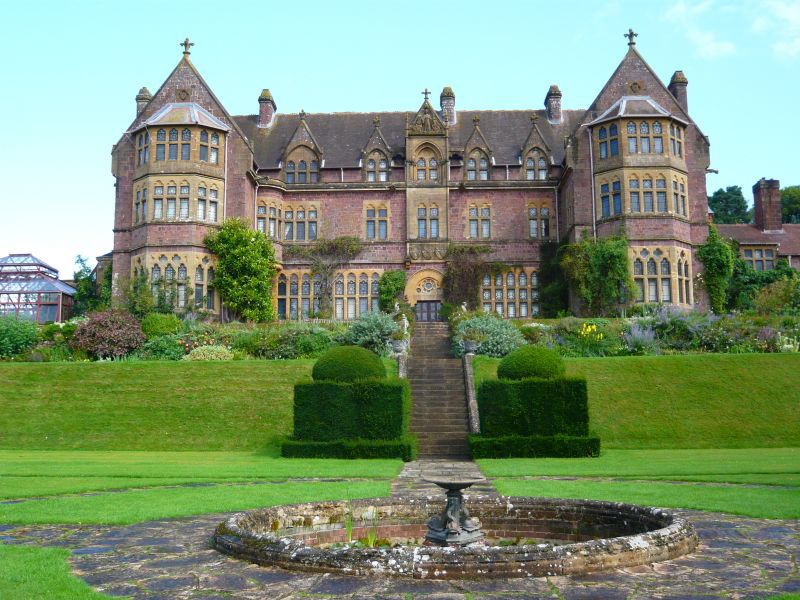 Country House. 1869-1874 for Sir John Heathcoat-Amory, the
grandson of John Heathcoat, the Tiverton factory owner, to the
designs of William Burges. Designs for internal decoration
partly Burges, but mostly to the designs of JD Crace, who
replaced Burges in 1875. First class carved decoration by
Thomas Nicholls. Smoking room of 1902 to the designs of Ernest
George.
MATERIALS: snecked red Hensley stone with Ham Hill dressings;
red tiled roof; stacks with embattled stone shafts; some
cast-iron rainwater goods.
STYLE: early French Gothic.
PLAN: on a west east axis. The garden (south) elevation has a
vista down to Tiverton town and the Heathcoat factory in the
distance. Overall U-plan, double-depth, with hall in the
centre, north side with a hall bay and north porch. Principal
stair rises from hall at the west end. Reception rooms along
south side, overlooking formal garden; single storey billiard
room projects to north towards east of main range.
EXTERIOR: front elevation: Single storey hall, otherwise 2 and
3 storeys. Gothic details include coped gables with crocketed
finals; corbelled cornice to battlemented stair turret and
variety of window forms including lancets and plate tracery.
Irregular 2:1:4:3 window front plus single storey smoking room
at right end. Single storey front left billiard room at right
angles to main range. 2 irregular gables to the front at the
left end.
Projecting square hall bay to the right of porch and embattled
stair tower with pyramidal roof at right end of main block.
Gabled porch has 3 centred arched doorway. Hall, to the right,
has a parapet and is buttressed with plate traceried transomed
stone windows.
Stair tower has a moulded string, 3 lancet windows (with 3
more on right return) and a corbelled embattled parapet.
Gable to left of porch incorporates a bellcote with large
carved hound on ridge above. Other carvings include deeply
projecting gargoyles.
Windows similar to those on garden elevation with some
variations, e.g. one with a diapered tympanum and some with 2
transoms. Billiard room has 1 and 2-light trefoil headed
transomed windows and a cornice of paired billiard balls below
the parapet which has high quality grotesque carvings.
Rib-vaulted porch has 2 leaf half glazed outer door with
decorated iron grilles and glazed tympanum, also with grille.
Arch of inner doorway is carved and there is an extraordinary
lamp holder carved in the form of the upper half of a man over
the apex. Retaining wall to the courtyard is coped and has
square piers with tiered caps at intervals.
The left return has three shouldered lateral chimneystacks.
Scattered fenestration matching that on the front elevation.
Lower roofed service wing adjoins at right angles.
The right return has a first floor corbelled lateral
chimneystack - windows match those on the front. Single storey
smoking room added by George & Yates in 1901. Single storey
projecting bay to the drawing room now leads to the
conservatory.
The garden elevation is more regular than the north side but
not quite symmetrical. 1:5:1 window front plus service wing to
right and conservatory to left. End wings broken forward and
gabled to the front. There is a moulded string course at
first-floor level and deeply projecting cornice with elaborate
gargoyles to the roll moulded parapet at second-floor level.
Iron framed windows with either glazed or blind plate
quatrefoil tracery above.
The wings have 3-storey canted bays, the windows with plate
quatrefoil tracery to the ground floors. At ground-floor level
the main range has mullion windows with double transoms. The
entrance has a round headed arch with drip moulding and carved
terminals of chained dogs. Stained glass and tracery overlight
to 2 leaf door. Each leaf has 6 panels with top 4 being glazed
with geometric stained glass. The central windows at first and
second-floor levels are enclosed by an ornamental surround
with carved columns, an angel figure in the gable and 3
shields above the door. Corbelled corner oriel window between
the left wing and main range. The remainder of the windows at
first-floor level are 2- and 3-light transomed mullion
windows. Gabled half dormers at second-floor level with
windows set in recessed arches. Diapered tympana. 2-light
transomed mullion windows except extreme left which is 3
light. Massive stone gargoyles and fleurons throughout.
INTERIOR: well-described in Pevsner, including various
alterations and an account of the restorations. The great hall
is the most spectacular room with a 4-bay arch braced roof
springing from first quality carved corbels. The hall was
decorated by Crace but redecorated in 1914 when the timber
hooded chimney-piece was reduced and the screens passage
probably removed. There are plans to restore the Crace
decoration on the basis of surviving evidence.
The stair cell is divided from the hall by an arcaded gallery
of Ashburton marble columns with French waterleaf capitals.
Grand stair with elaborate treatment to the underside and a
balustrade of diagonally-set balusters above a pierced frieze
and newel posts decorated with blind arcading.
The Burges work elsewhere in the house is characteristically
flamboyant including texts; remarkably lively carvings and the
extraordinary 'jellymould domelets' which decorate the drawing
room ceiling. The service wing, which is occupied by the
family, was not inspected.
HISTORY: Burges' plans for elaborate internal decoration are
known from original drawings in the possession of the National
Trust and there is also a good photographic record of the
house.
Pevsner described the house as "an eloquent expression of High
Victorian ideals in a country house of moderate size".
The house in the care of the National Trust since 1973.
(The Buildings of England: Pevsner N: Devon: 1989-:
PP.526-528).