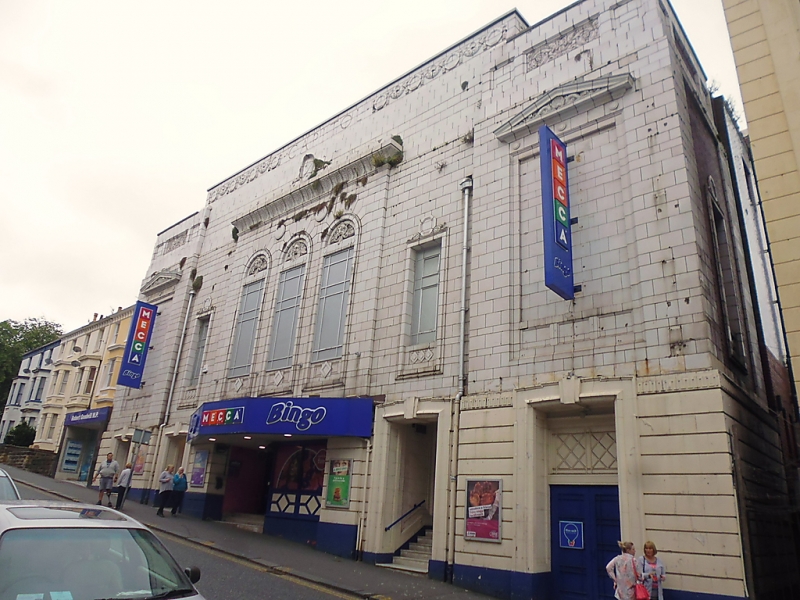 EXTERIOR: Symmetrical facade in white faience, standing on a low painted plinth, which has to rise in order to compensate for the steep gradient. The main entrance is beneath a canopy and is flanked by two subsidiary entrances and two exit apertures enclosed by heavy mouldings and large keystones. Three tall central windows are set in a slightly protruding area under an enriched straight pediment with a cove cornice, surmounted by an oval cartouche. There are side wings with shallow aedicules having flat=pitched pediments, above which are panels of Rinceau ornament. This decoration continues as a frieze along the top of the central block to flank original lettering thus: CAPITOL. There are smaller vertical windows, surmounted by wreaths, set between the central block and the aedicules.

INTERIOR: A foyer leads to the large double-height auditorium. It has a rusticated coved proscenium and a canted ante-proscenium - the return bays facing back into the body of the auditorium. The ante-proscenium bays contain `Neo-Grec' grilles behind which were the organ chambers, while above, arches extend forward becoming pointed hoods. Over the proscenium is a frieze of winged beasts with human heads supporting ribbon wreaths and flanked by Rinceau ornament. There is a dado rail with more Rinceau panels, incorporating masks. The side walls are treated as a heavily moulded arcade with false balconies containing spiky lozenge ornamentation of almost Gothic character. The arches are surmounted by mask keystones. The pilasters have capitals incorporating three rosettes each. Dentil cornice. Plain barrel ceiling. There is a large balcony with a central vomitory entrance. Shallow cin?-variety' stage.

ANALYSIS: A large super-cinema dating from the years immediately before the introduction of sound films in the late 1920s (the Capitol was wired for sound' in the last months of 1929), in which the elaborate classical decorative detail has survived virtually intact. Bingo took over permanently in 1977.