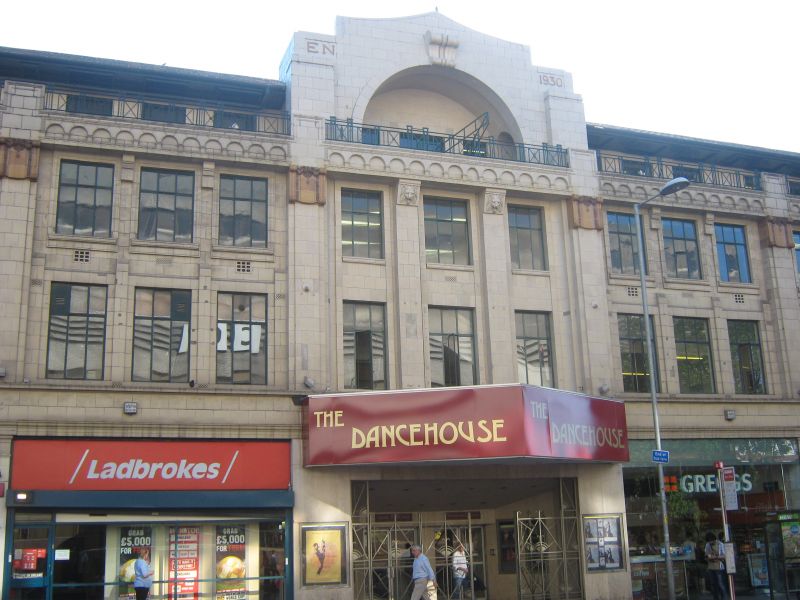 EXTERIOR: Long, four-storey principal facade in classical style, clad in white faience, the ends curving into the return walls. The facade is divided into nine bays, filled with shop units at ground level, except for the central bay which forms the entrance to the theatre, with a canopy above to attract attention. At first and second floor levels the bays are separated by giant pilasters with stylised yellow faience Ionic capitals. The cornice is ornamented with miniature arches. Each bay contains six windows. All the bays, excepting the one over the entrance, have subsidiary pilasters on the first floor and consoles on the second floor to support the cornice. The windows over the entrance are separated by giant pilasters surmounted by capitals in the form of lion masks. The third floor is set back behind a balcony, which has a simple metal balustrade in the form of cross-members and verticals. The bay over the entrance rises to form an arched portico, with a volute keystone and a shaped pediment. On the top left corner of this appear the letters EN (for Emmanuel Nove) with the date, 1930, on the top right corner. The metal balustrade also continues across the bottom of the portico. The central pilasters of the quadrant ends have capitals in the form of embellished oval cartouches. The second floor quadrant central windows have faience balustraded balconies. All the windows have six light mullion and transom glazing. The last bay on the returns is treated differently, the furthest half of each being blind and the nearest half of the left hand one only having a window at second floor level. The rear elevation has large horizontal first-floor windows and a scattering of smaller windows to light the main stairwell, hallways and lavatories. Flat roof with gable ends and flat-pitched sides. Art Deco folding metal gates at the entrance to the theatre are not original, but were added in an appropriate style in 1992.

INTERIOR: Foyer retains a little original ceiling decoration, and was refurbished in the Art Deco style in 1992, with wall decoration inspired by that elsewhere in the building. Staircase rises through the centre of the building, with a metal balustrade with rising sun and Greek fret decoration; some of this is original, more has been renewed to the same pattern. At rear an escape stair set around 1930s metal lift cage and lift. The surviving cinema auditorium is at the second and third floor levels and has much fine Art Deco plaster decoration on the walls, a little renewed. This has an undulating profile with attenuated fluted pilasters and broader ones in the form of cascades or of the zig-zag Moderne type. Flat barrel ceiling divided into fields with plaster cruciform ventilation grilles. The other cinema auditorium and the first-floor spaces (parts of which were originally a restaurant and waiting halls) have now been converted to offices and rehearsal rooms; while the wall decoration here has gone, the Art Deco cruciform plaster ventilation grilles have survived. The windows and interiors of the shops are not of special interest; the shops' significance is only as part of the formal composition of the facade.

ANALYSIS: The cinema was built as a speculative suite of halls by Emmanuel Nove, who was a housing estate developer. After his project failed, it opened as the Regal Twins (operated by the Manchester Piccadilly Picture Theatre), closing as the Cannon in 1986, to become the Dancehouse Theatre in 1992. The Regal Twins represents an early example of a multiple cinema complex, a type which only became common some forty years later with the decline in film attendances. The exterior is a particularly handsome faience composition. Internally there is much high quality Art Deco plaster decoration to the surviving auditorium, in a surprisingly rich Art Deco idiom rare in Britain.