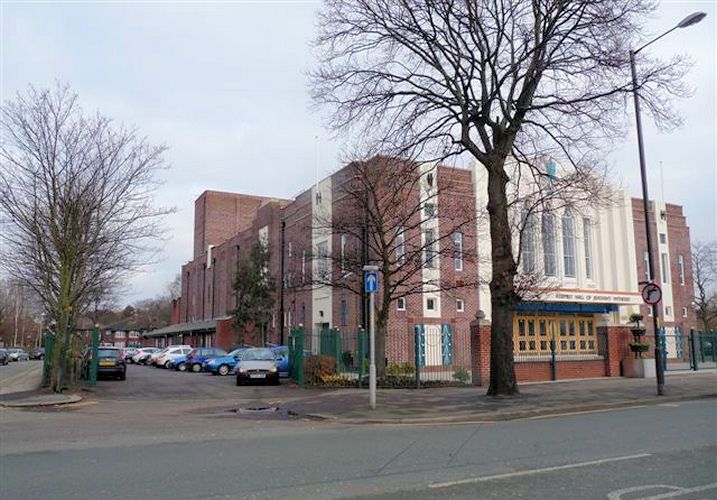 Former cinema, constructed as the Forum in 1933-4 to the designs of Charles Hartley. Dark brown facing bricks with faience central feature, with steel frame; roof not seen. Double-height auditorium with single balcony, stage and fly-tower, served by foyers to front.

EXTERIOR: Symmetrical Moderne facade with a faience central feature, which is recessed and stepped up in the middle, thereby oversailing the flanking parapet. Five sets of double entrance doors, above which is a canopy with chamfer corners. At first floor level are five tall, slender windows, the central three of which have canted, quasi-Egyptian style tops. The flanking brick areas of the facade contain twin symmetrical arrangements incorporating blocked doorway apertures at ground level, from which rise tall faience panels containing, firstly, a small square aperture, then a tall narrow one (in line with identical ones running horizontally either side in the brick area) and then topped by another small aperture with neo-classical grilles covering a ventilation extract, all surmounted by lozenge devices supporting flagstaffs. Double stepped parapet. Long return walls articulated with, firstly, symmetrical arrangements of vertical faience incorporating doors under rectangular windows and then small narrow vertical windows serving lavatories, followed by stepped-up areas with panels probably used for film advertising hoardings. The auditorium's steel frame is expressed by buttresses, the inner mouldings dying into the parapet. Beyond is the tall bulk of the stage fly tower.

INTERIOR: Foyer leading to a large Moderne style double-height auditorium. Rectangular proscenium framed by embellished triple lighting coves. Splayed ante-proscenium comprising a dado, above which are long, stepped-up balconettes and then elaborate plaster decoration which, on one side, was to conceal the organ chambers and resembles traditional church organ pipes. These features are flanked by decorated roundels and surmounted by sunbursts. The ante-proscenium splay is terminated by a curving false proscenium with fluted pilasters and stylised Ionic capitals. Ridged ceiling extending back over the balcony. The wall areas between the ante-proscenium and the balcony front are enlivened by large vertical panels. Emergency exit doors in the side walls of the auditorium. Fluted plaster balcony front with roundels. Access to the balcony is in the angles of the rear wall. There is a deep compartmentalising vault on the balcony soffit incorporating fluted banding and roundels containing honeycomb plaster ventilation grilles. Deep stage and fly tower. The upper foyer has a ridged and arched ceiling with a streamlined plaster central feature.

ANALYSIS: An unusually large and elaborate suburban `neighbourhood' cine-variety theatre of the 1930s, a good example of the Moderne style and with a virtually unaltered auditorium. The Forum closed as the ABC cinema in 1974, then was operated as a live theatre until acquired by the Jehovah's Witness organisation.