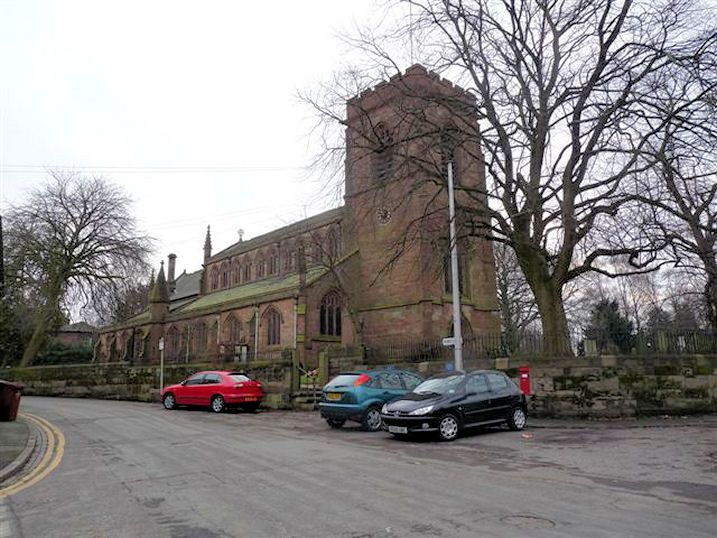 Parish church. C15 but rebuilt (except for the tower, which
was restored) in 1873-76, to designs of J.S.Crowther. Coursed
squared sandstone, slate roofs. Perpendicular style. West
tower, nave with north and south aisles, chancel with north
and south chapels. String courses (etc) variously enriched
with carved grotesques, etc. The 3-stage tower with diagonal
buttresses, moulded plinth, string-courses and embattled
parapet, has a restored 2-centred arched west doorway with
moulded surround and ogee hood with crocketed pinnacle, a
restored 3-light west window with Perpendicular tracery, and
restored 2-light louvred belfry windows. The 5-bay nave has
pairs of 2-light windows with Perpendicular tracery, and
crocketed corner pinnacles. The aisles are buttressed and have
segmental-pointed 3-light windows with hoodmoulds, except in
the 2nd bay where the south aisle has a gabled porch with
angle-buttresses, a 4-centred arched doorway with shafts and
carved spandrels, and a statue in a niche with a tall
crocketed pinnacle; and the north aisle has a 2-centred arched
doorway. The 2-bay south chapel and 3-bay north chapel,
continued from the aisles (large octagonal pinnacles marking
the junction), have 3-light windows with Perpendicular
tracery; the chancel has a 3-light window on the south side;
and at the east end the aisles and chancel have windows of 4,
5 and 5 lights with Perpendicular tracery. Interior: 5-bay
aisle arcades of octagonal columns with moulded and embattled
caps, and double-chamfered 2-centred arches with linked
hoodmoulds which have figured stops; short wall-posts on large
corbels in the form of angels holding shields with symbols of
the crucifixion; tall chancel arch moulded in 2 orders; 2-bay
north and south chancel arcades occupied by re-located screens
of 1527 with thin tracery and elaborately carved leaf frieze;
hammer-beam roof to chancel; various wall monuments to members
of the Tatton and Egerton families including: Robert Tatton
(d.1689), aedicule with putti; Mrs Egerton (d.1784), urn with
carved flower garland; William Egerton (d.1806), woman lying
on sarcophagus; and to Thomas Worthington (d.1856), mourning
woman with 3 sarcophagi under weeping willow.