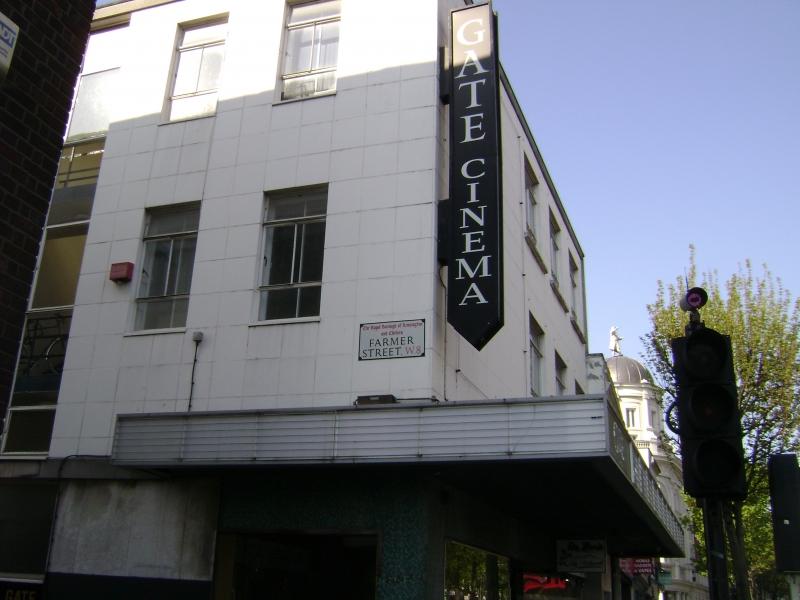 Cinema and attached shops. Opened in 1911 as the Electric Palace, converted from a restaurant of 1861 to the designs of William Hancock. The foyer and offices above it were reconstructed again in 1962 by Douton and Hurst as part of a London County Council street widening scheme. Stock brick, with faience clad steel-framed modern-style facade to Notting Hill Gate. Long rectangular auditorium on a single level entered via small foyer, with rear fire exits directly on to back street. Above are two storeys of offices, and there is a basement.

EXTERIOR. Faience-clad three-storey facade to Notting Hill Gate has at ground level, the entrance to the cinema ranged to the left with shop units to the right. Above are six vertical windows on two floors, ranged to the right. The faience cladding continues around to the left return where the 1962 work is terminated by the entrance doors to offices above the cinema, over which is a glazed curtain-wall for a stair hall. Four more windows on two floors in the faience clad part of the return. All the windows are metal-framed with horizontal top and bottom panes, dividing panes in the middle. Simple concrete cornice. A canopy with a raking underside extends along the frontage, continuing around to the return; the front edge of the canopy supports two film advertising light box displays. The foyer is fully glazed, and has glass entrance doors with bronzed handles in the form of scrolling film. The remaining section of the left return and the rear walls are in stock brick with gauged brick headers over the windows and doorways. The return rear corner is angled with a doorway for access to the basement. The rear part of the two-storey office block is supported by the roof of the cinema auditorium.

INTERIOR. Small foyer with access to the auditorium through a door in the right-hand corner. The auditorium runs to the left at a ninety degree angle to the foyer. Long, narrow auditorium with a raking floor and baroque decoration. The side walls are divided into bays by pilasters, each bay having two panels. Dado (with moulded rail), which also serves as a plinth for the pilasters. Each pilaster has a capital in the form of a simplified triglyph, while each panel is bordered by mouldings with corner ears, the top edges surmounted by scrolling foliage. Narrow ornamented cornice. The ceiling is heavily coffered with ovolo enclosing each square, the bays being demarcated by bars of abundant plaster fruit. In the centre of each coffer is an acanthus roundel. The projection room is at the rear of the auditorium and the proscenium is obscured by recent drapery surrounding the cinema screen.

Shop interiors not of special interest.