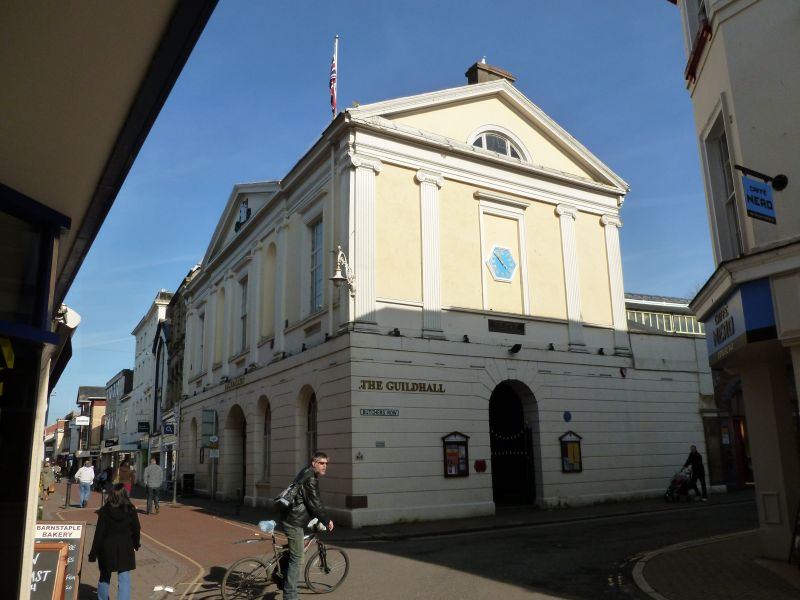 Guildhall. 1826. By Thomas Lee; side wall facing Butchers' Row
probably 1855 by RD Gould. Solid rendered walls, portions
exposed internally in 1991 suggest that front wall is of red
brick and right side wall (probably a pre-1826 party wall) is
of stone rubble. Slated roof. Rendered chimney with moulded
cornice on right gable-end.
Open ground storey in centre, originally leading to butchers'
market at rear; latter replaced by Market (qv) in 1855. To
right, mayor's parlour, created in 1922 out of the former
charge-room and cell; shop to left. 2nd storey has courtroom
to left (rising through 3rd storey) and council chamber to
right with jurors' rooms above. Stair projection to rear left,
giving access to public seating; main staircase behind mayor's
parlour with 1855 entrance from Butchers' Row. There was
originally a house abutting this side.
2 storeys, with disguised 3rd storey at right-hand end. 5-bay
front to High Street. Ground storey has horizontal
channelling. Round-arched openings, the centre one wider than
the rest; this and the arch to left of it have iron gates with
spearhead uprights; the others have small-paned glazing.
Upper-storey bays flanked and separated by fluted Ionic
pilasters supporting an entablature which breaks forward over
the 3 narrower centre bays and is there finished with a
triangular pediment. Middle and end bays have windows with
8-paned sashes (adjusted at right-hand end to accommodate 2
floors); moulded architraves, friezes and cornices. The 2 bays
flanking the centre have semicircular, round-headed niches,
continued moulded cills; sunk oblong panel beneath each
window.
Similar 4-bay design to Butchers' Row with triangular pediment
overall. No windows, apart from a blind one in centre of upper
storey. Round-arched doorway in centre of ground storey.
Semicircular window in pediment. On the roof an octagonal
bell-turret with round-arched opening in each face; domed
leaded roof with ornate weather-vane; contains 1714 bell from
the old butchers' market. The bottom quoin on the street
corner is a block of polished granite inscribed CENTRE OF
BARUM TURNPIKE MILEAGE 1879.
In the blind window facing Butchers' Row is an octagonal clock
face originally on the Northgate c1760-1842; on the Bluecoat
School 1842-1971; moved here 1982. To the left of the doorway
below is the mayor's iron poor box dated 1895; frame and door
with elaborate scrollwork.
INTERIOR: open part of ground storey is divided by an arcade
of 3 round arches with plain imposts; 2 similar arches at
rear. A further arch opens into the rear stair; this has an
iron gate with spearhead uprights.
Entrance lobby from Butchers' Row has late C17-style panelling
of 1922 with single-rib Jacobean plaster ceiling and pendant
brought from an unnamed demolished building in The Strand.
Stone staircase to upper floor.
Courtroom has dado of small rectangular panels with matching
justices' bench at S end; similar side-benches and 2 square
mobile boxes on rollers for accused and witnesses. Above the
side benches are short galleries for ladies and grand jury
with access from 3rd storey above council chamber;
quatrefoil-section iron columns, rail of turned wood
balusters. At N end tiered seating for the public; at the
front of it a similar wood railing, but with decorated iron
cresting. In front of the bench a large table (probably an
enlargement of the original) for clerk and lawyers. Coved
ceiling having 3 large rectangular panels with enriched
frames; patterned chandelier boss in centre panel, patterned
ventilator grilles in the other 2.
Council chamber fitted out with Jacobean panelling, enriched
pilasters and carved overmantel dated 1617 and with initials
of Pentecost and Elizabeth Dodderidge. It was removed to a
Marist Convent in Barnstaple on the demolition of Cross Street
in 1910 and brought here in 1949. C19 moulded cornice. Behind
the panelling a C19 papier-mache dado.