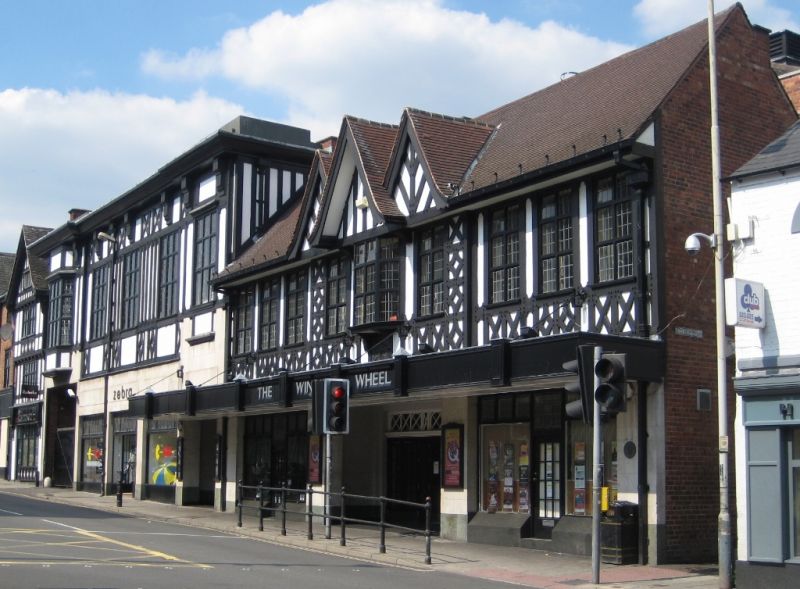 EXTERIOR: In two blocks. The right-hand block contains the entrance on the ground floor, centrally placed and recessed (with the side walls painted as ashlar blocks and with an acanthus cornice). The upper floor has nine bays, the middle three bays protruding slightly with a central oriel. All the windows are leaded, with a central mullion and two transoms. Steeply pitched roof with three central gables, the middle one protruding and cutting into the corners of the two flanking gables.

The left-hand block is of five bays with shopfronts in the ground floor of the centre three bays (with Art Deco chevron leading in the upper lights), a carriageway in the left-hand aperture and an entrance to the former restaurant (the word RESTAURANT and a monogram `CPH' in the leaded lunette) in the right-hand aperture. Upper floor five bays: oriel to the left over the carriageway, with four windows to the right, all leaded with two mullions and two transoms. Imitation timbering continues on right return wall of entrance block but the other rear walls are in plain stock brick.

INTERIOR: Entrance doors with subdued neo-classical glazing bars in the frieze lunette. Foyer with square columns having Ionic capitals and plaster pendants. Stairs to balcony foyer, with baroque balustrades, on left, and on the right, a late seventeenth century style chimneypiece with a grey marble bolection surround and a triple-light overmantel mirror. Cornice with acanthus mouldings.

Rectangular double-height auditorium. Proscenium comprises a broad inner moulding with coffering decorated with acanthus, a thin moulding of acanthus and square rosettes and a broad outer fasces moulding bound at intervals by more acanthus, with, in the architrave, a Vitruvian scroll inserted between the two latter mouldings flanking a horizontal panel representing an Arcadian scene of dancing female figures, fauns and the god Pan, all entwined with garlands. The first bays of the ante-proscenium are double height. The rest of the side wall bays are to two storeys divided by an entablature, as far as balcony front. The upper level is divided by enriched pilasters and composite capitals incorporating masks. The lower level has pilasters of leaf and tongue enrichment. Garland cornice. Curving and fluted balcony front. Shallow barrel ceiling in two sections, the section over the four bays nearest the proscenium being lower. The entire ceiling is partitioned into fields by mouldings of garland dentil decoration, with roundels and rectangular laylights of leaded glazing. Balcony arranged in two areas separated by two plain timber barriers and entered through two side vomitories with timber panelled walls. Balcony supported by square columns with plain Tuscan capitals, the soffit having roundels of leaded glazing surrounded by sunbursts.

Balcony cross-over foyer with barrel ceiling and cornice enriched with mouldings of fruit, fleur-de-lys birds, wheatsheaves and strapwork. A rivetted plate shows in the wall of the emergency exit stairs down to the street front. Former restaurant on the first floor with pilasters and cornices to match foyer below, with a late seventeenth-century style stone bolection moulded chimneypiece. Timber balustraded to ballroom stairs with turned finial to newel post. Large almost square ballroom with galleries at both ends. Central oval done of leaded panes. Timber dado panelling. Plaster enrichments on ceiling beams. In a recess opposite the entrance end there are timber stairs to a gallery. Rear service passage with windows of complex vernacular style leading.

ANALYSIS: Included as a rare and elaborate 1920s' cinema complex, its decoration largely unaltered both externally and internally in its adaptation to new uses.