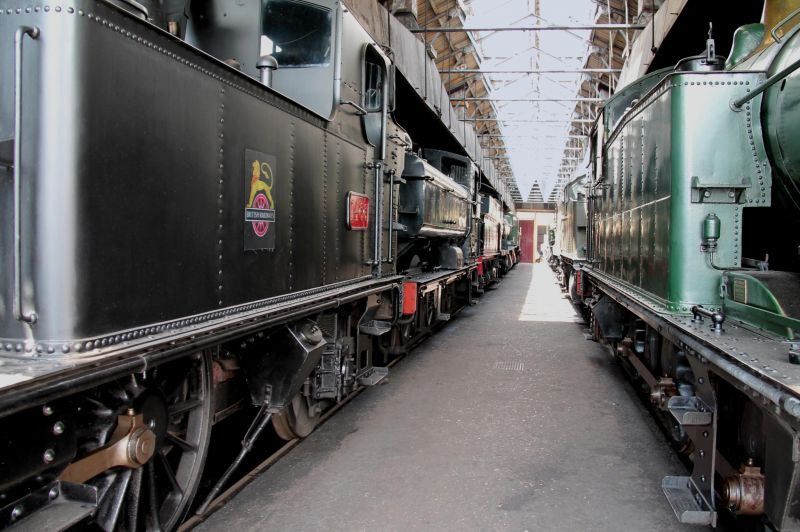 Railway engine shed. 1931 for the Great Western Railway. Brown brick, asbestos sheet and steel. Rectangular plan four-road engine shed 64.0m by 20.4m to accommodate some sixteen locomotives. Steel frame with brown brick lower walls and a corrugated asbestos sheet cladding to eastern upper wall. Corrugated iron roof cladding, which is not original, over timber boards. Two gable north and south entrances with three pairs and four pairs of hinged timber doors respectively. Two roads in each gable with inspection pits outside the south entrance of the shed and an iron water crane central to each pair of roads about 30m outside the shed. The gables are clad in sheeting. The lower east wall is plain brick, the upper wall is clad in sheeting with twenty-one steel-framed windows. The west wall is plain brick and is abutted by a range of plain brick lean-to offices and workshops accessed individually from the engine shed with seventeen steel frame and three timber sash windows with reinforced concrete heads and cills under a timber boarded and slated roof. The westernmost road through the engine shed connects with the adjoining 1931 repair/lifting shop (qv). The roof is part glazed, with walkways and tall exhaust vents.
Interior: has an open light steel truss roof with smoke catchers over the roads. Inspection pits through length of roads. The oil store has an original range of oil tanks.
History: Didcot engine shed forms part of a depot for the stabling, servicing and day-to-day mechanical repair of steam locomotives. It was built as one of the government funded improvements to the GWR in the 1930s under the Development (Loans, Guarantees and Grants Act (1929), which was designed to provide employment in the Depression. It has been little altered and is now the only medium sized steam running shed in England still in use for its original purpose. The shed was closed by British Rail in June 1965 but continues in use by the Great Western Society.
References: Paul Bolger, BR Steam Motive Power Depots WR, Ian Allan, 1983, p 14.
Adrian Vaughan, A Pictorial Record of Great Western Architecture, OPC, 1977, pl 467 for drawing of GWR standard running shed 1932, and pl 475 for standard water column.
Chris Hawkins and George Reeve, Great Western railway London Division Engine Sheds, Wild Swan Publications, 1987, pp 278-290.
E T Lyons, An Historical Survey of Great Western Engine Sheds 1947, Oxford Publishing Company, 1972, p 19 and p 70.
Information from Michael Dean, Chief Executive, Great Western Society.