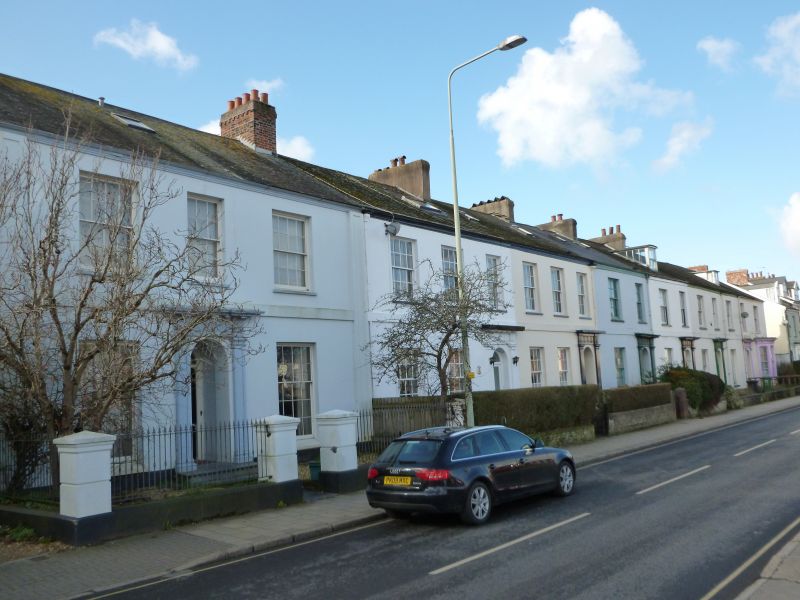 Formerly known as: Nos.1 to 7 (Consecutive) Nelson Terrace
NEWPORT ROAD.
Terrace of 7 houses. 1834 onwards. Solid rendered walls.
Slated roofs. Chimneys on party walls between Nos 98-103;
mostly rendered, but that at Nos 98 & 99 and part of that at
Nos 99 & 100 are of old red brick. C20 red brick chimney on
right end wall of No.104.
2 storeys with garrets (probably inserted later) at Nos 99,
101, 102 & 104; basements. No.98 is 3-window range with centre
doorway; Nos 99 & 100, 3-window range with doorways to right;
Nos 101 & 102, 2-window range with doorway to right; No.103,
3-window range with centre doorway, No.104, 2-window range
with doorway to left. Otherwise, the terrace is built to a
uniform design.
Bead-moulded, round-arched doorways; flanking pilasters
supporting triglyphed entablatures with modillioned cornices.
6-panelled doors with centre bead-moulding; at Nos 100, 102 &
104, the top 4 panels have been filled with leaded coloured
glass; No.99 has a glazed mid/late C20 wood door. Raised band
above ground storey, except at right-hand end of No.104, where
it has been removed. No.98 has flanking giant panelled
pilasters, possibly a later addition.
Almost all the windows have barred sashes; 8 over 12 panes in
ground storey, 8 over 8 panes above, except that the window
above the doorway has 6 over 6 panes. At No.103 the
ground-storey windows have been altered; in that to left the
lower sash now has only a single upright glazing bar; in that
to right the sashes have been replaced by a single sheet of
glass. At No.104 the ground-storey window has been replaced by
a mid C19 canted wood bay; lights have rounded top corners,
2-paned sashes with a horizontal glazing bar, the middle light
also with margin-panes; bracketed top cornice with fluting
between the brackets.
Stepped board below the eaves, except at No.103 which now has
a plain board. Nos 99 & 100 have old (possibly original)
rainwater-heads decorated with a floral motif. No.99 has a
small flat-topped dormer with plain wood casements. No.102 has
a late C19 dormer with glazed sides and cambered top; 2-paned
sashes, shaped eaves-board; No.104 has a C20 flat-topped
dormer with metal casements. INTERIORS not inspected.
This was until C20 Nos 1-7 Nelson Terrace.