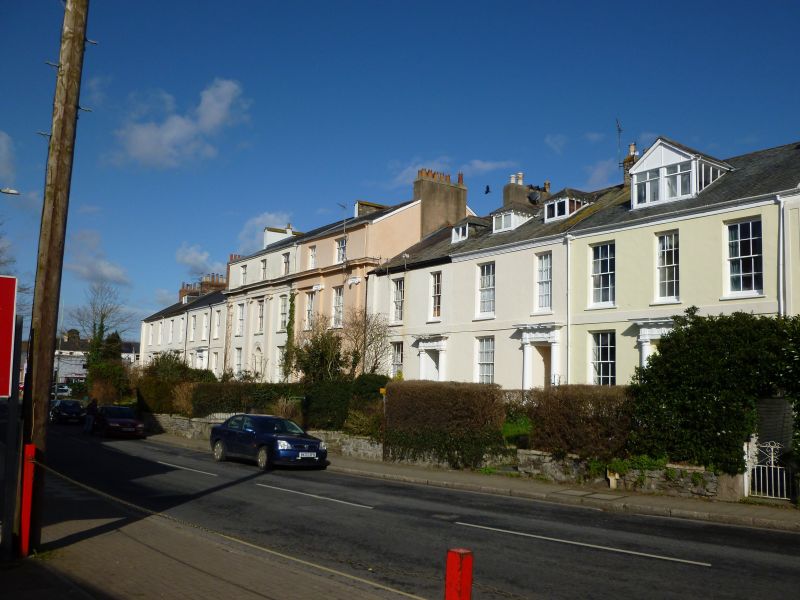 Terrace of 8 houses. Early C19. Solid rendered fronts, Slated
roofs.
Chimneys on left side wall at Nos 1-4, right side wall at Nos
5-8. 2 storeys at Nos 1-3 & 6-8; 3 storeys at Nos 4 & 5.
Semi-basements; garrets (probably inserted later) at Nos 2 &
6-8. Nos 1, 2 & 5-7 are 2-window range, Nos 3, 4 & 8 are
3-window range. Doorways to right at Nos 1, 2, 6 & 7; in
centre at Nos 3, 4 & 8; to left at No 5.
Designed as a unified composition, the 2 middle houses (Nos 4
& 5), which are a storey taller than the rest, having giant
Ionic pilasters between and flanking the windows in ground and
2nd storeys; these support an entablature (mutilated at No.5)
which breaks forward over the end-pilasters and over each pair
of pilasters in the centre. Doorways of those 2 houses are
round-arched with panelled pilasters, moulded archivolts and
keyblocks; female head on keyblock at No.5. At No.4
semi-basement has horizontal channelling.
In the flanking houses (Nos 1-3 & 6-8) doorways are
flat-headed with attached Doric columns and triglyphed
entablatures with modillioned cornices. Raised bands between
the storeys. Panelled pilasters flanking each group of 3
houses, except that the left-hand pilaster of the group to
right has been altered. Stepped eaves cornices (rebuilt in
inaccurate replica at No.8), originally breaking forward over
the pilasters, but now doing so only over the right-hand
pilaster of the group to left.
All 8 houses have 6-panelled doors, the middle panels much
smaller than the rest; at Nos 2, 3, 6 & 8, the upper and
sometimes the middle panels are now glazed. Windows have
6-paned sashes, except that those in the 3rd storey at Nos 4 &
5 have only 3 panes in the upper sash. Nos 1, 6 & 7 have small
hipped dormers; No.8 has a large gabled one. INTERIORS not
inspected.