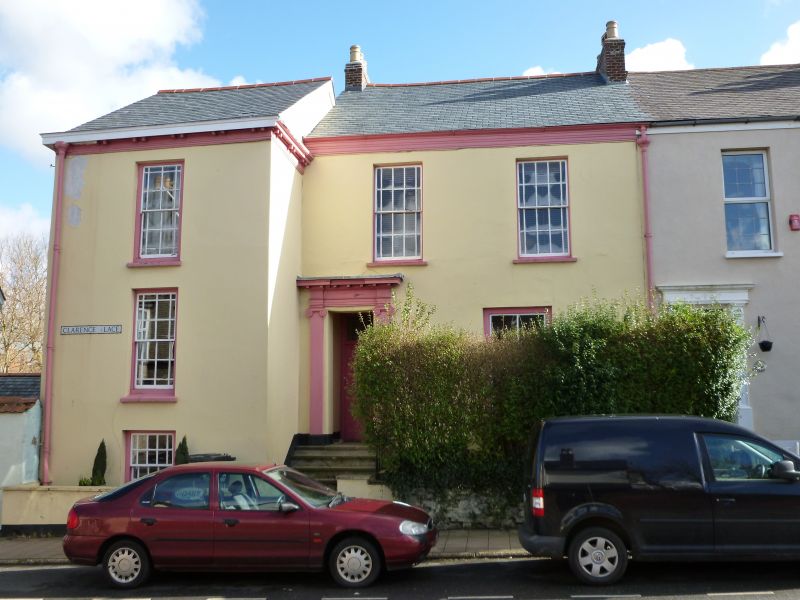 Pair of houses forming part of a 5-house terrace. Early C19.
Solid rendered fronts. Slated roofs. 3 red brick chimneys on
ridge.
2 storeys, No.1 with semi-basement at left-hand end. Each
house 2-window range with doorway to left, except that No.1
has a 1-window projection, probably a later addition, to left.
Doorway of No.1 has Ionic pilasters and entablature with
modillioned cornice; 8-panelled door with knocker.
Ground-storey window to right has 4-paned box-framed sashes.
Other ground and upper-storey windows have barred sashes with
margin-panes: 6 over 6 panes in main body of house, 4 over 4
panes in projection. Projection has semi-basement window with
6 over 6 panes and margin-panes. Stepped boards below the
eaves, those on the projection with in addition cornices on
paired brackets. At No.2 the door, doorcase and windows have
been replaced in late C20 plastic, the former 2 are inaccurate
Georgian style. Plain eaves-board of similar date. INTERIOR
not inspected. Included for group value.